Event for Saving the Soul of Georgia

Maurice C. Daniels, dean and professor of the University of Georgia School of Social Work, will discuss SAVING THE SOUL OF GEORGIA: DONALD L. HOLLOWELL AND THE STRUGGLE FOR CIVIL RIGHTS, a biography of the famed civil rights attorney, on Thursday, February 26, 2015 at 7:00 p.m. at the Atlanta-Fulton County Central Library. He will be joined by retired federal judge Horace T. Ward, who practiced law with Hollowell in the 1960s. The event is free and open to the public.

The biography, which has been praised by scholars, continues to earn accolades, most recently from Polly Price of the Emory University School of Law and Kenneth W. Mack, Lawrence D. Biele Professor of Law at Harvard University.

Price’s review of the book, which appeared in the March 2015 issue of Journal of American History, called the biography “compelling.”  Wrote Price, “In Daniels’ hands, court proceedings come to life with a narrative accessible to lawyers and non-lawyers alike. . . . The inclusion of twenty-seven carefully selected photographs further brings to life one of the best biographies of the civil rights era.”

Mack, co-faculty leader of the Harvard Law School Program on Law and History, examined the Hollowell biography along with Yvonne Ryan’s “Roy Wilkins: The Quiet Revolutionary and the NAACP” in the February 2015 issue of American Historical Review. Both authors, he wrote, “have crafted well-researched accounts that explore much-neglected aspects of the history of the civil rights movement.”

“Daniels’s book,” Mack also wrote, “makes a point that needs emphasis: that embedded within the grassroots movements that now occupy much scholarly attention were thousands of everyday legal confrontations where lawyers like Hollowell played an essential role in allowing activists and ordinary African Americans to negotiate a repressive local legal system. . . . there is much to admire in his exploration of the various ways that rank-and-file lawyers like Hollowell were essential in realizing the democratic promise of the movement.”

Judge Horace Ward will also join Daniels for a discussion of the book. Ward was denied admission to the University of Georgia School of Law in the 1950s, but went on to earn a law degree from Northwestern University and returned to Georgia to join Hollowell’s legal team in their successful effort to desegregate the University. He later became a partner in Hollowell’s firm, during which time he worked on several other significant civil rights cases. He went on to serve as a judge in Fulton County, Georgia and the U.S. District Court for the Northern District of Georgia.  In 2014 he was awarded an honorary doctor of laws degree by The University of Georgia.

The event, which will include a book signing, is sponsored by the University of Georgia Press, the Atlanta-Fulton County Public Library System and the Foot Soldier Project for Civil Rights Studies and Research. The library is located at One Margaret Mitchell Square NE, Atlanta, Georgia. For more information, contact Amanda Sharp, University of Georgia Press  (asharp@uga.edu or (706), 542-4145), or Harold Waters (hwaters@uga.edu, (706) 542-5450)).
Posted by UGA Press at 2/24/2015 05:57:00 PM

The University of Georgia Press and the Morehouse College Martin Luther King Jr. Collection will collaborate to develop a groundbreaking new series of books using the archives of the Morehouse MLK Collection, which includes nearly 10,000 items.

To be written by notable scholars of civil rights, race relations and American history and politics, the series will provide insightful overviews and fresh analyses of King’s intellectual, theological and activist engagement. A variety of themes will be touched upon, including poverty, nonviolence, the Vietnam War, capitalism, racial discrimination, education and civil rights.

Acquired by Morehouse College in 2006, the Morehouse MLK Collection represents a large portion of the Morehouse alumnus’ legacy, spanning the years between 1944 and 1968. Included are hundreds of handwritten notes, personal letters, famous and lesser-known speeches, manuscripts and sermons. Highlights include King’s 1964 Nobel Peace Prize lecture, his 1963 “Letter from Birmingham Jail,” and an early draft of his “I Have a Dream” speech. Of significance are the 1,100 books from King’s personal library, many annotated with handwritten notes.

Drawing upon this wealth of primary documents and source information, the series authors will examine King’s legacy as an activist, theologian, philosopher and political theoretician. Viewing the papers through a 21st century lens will illustrate how King’s words, vision and actions affected other movements and philosophies, and on how others responded to and perceived his work, both during his life and after his assassination.

Walter Biggins, senior acquisitions editor at UGA Press, will work closely with a series advisory board and oversee acquisitions within the series.

“I’m so excited about the series because it situates King within the larger and never-ending struggle for human rights, and because it extends the promise and mission of his work into the present day,” said Biggins. “King should loom larger, and with more complexity, in the world as a result of the series’ groundbreaking work.”

The Morehouse MLK Collection’s director, Vicki L. Crawford, will work with the UGA Press as the series’ general editor, overseeing the vetting of new series prospects and coordinating with the authors. Crawford, herself a civil rights scholar, is coeditor, with Jacqueline Anne Rouse and Barbara Woods, of “Women in the Civil Rights Movement: Trailblazers and Torchbearers, 1941-1965.”

“We are excited about the opportunity to collaborate with the University of Georgia Press to publish a series of books inspired by the unparalleled documents in the Morehouse College Martin Luther King Jr. Collection,” said Crawford. “As a gathering of teachable texts, this series is an important step in our mission to foster greater understanding of Dr. King and the movement for civil and human rights.”

University of Georgia Press
Founded in 1938, the University of Georgia Press is the oldest and largest book publisher in the state. It has been a member of the Association of American University Presses since 1940. With a full-time staff of 26 publishing professionals, the press currently publishes 60-70 new books a year and has more than 1,800 titles in print. It has well-established lists in Atlantic World and American history, American literature, African-American studies, Southern studies and environmental studies, as well as a growing presence in the fields of food studies, geography, urban studies, international affairs and security studies. For more information on UGA Press, see www.ugapress.org/.

The University of Georgia Press is pleased to announce the formation of the new Bradley Hale Fund for Southern Studies. This fund will support the publication of a wide range of scholarly and general interest books in the areas of southern history, culture, literature, food and foodways and more.

Support for the fund comes from the Sheffield Harrold Charitable Trust, headed by co-trustees Ellen Hale Jones and F. Sheffield Hale of Atlanta, Ga. The fund is named in memory of their father, Bradley Hale (1933-2011), a partner in the Atlanta law firm King & Spalding. Hale served as chair of the Georgia Trust for Historic Preservation and the Atlanta History Center and as founding chair of the advisory board of the Georgia Historical Society. He was also a trustee of the National Trust for Historic Preservation and vice chair of Sweet Briar College.

“Our father pursued many enthusiasms, but he loved nothing more than the history, culture and stories of the South,” said Sheffield Hale and Ellen Hale Jones. “He sponsored three books on history during his lifetime, and we could think of no better way to perpetuate his intellectual curiosity.”

“The Press is grateful to the Hale family for this generous gift of support. We will strive to honor Bradley Hale’s legacy through continuing to publish the most stimulating and thoughtful scholarship on the ever-more complex global South,” said Press director Lisa Bayer.

The first title to be published with support from the Bradley Hale Fund is A Boy from Georgia: Coming of Age in a Segregated South by Hamilton Jordan and edited by Kathleen Jordan (October 2015).

University of Georgia Press
Founded in 1938, the University of Georgia Press is the oldest and largest book publisher in the state. It has been a member of the Association of American University Presses since 1940. With a full-time staff of 26 publishing professionals, the press currently publishes 60-70 new books a year and has more than 1,800 titles in print. It has well-established lists in Atlantic World and American history, American literature, African-American studies, southern studies and environmental studies, as well as a growing presence in the fields of food studies, geography, urban studies, international affairs and security studies. For more information on UGA Press, see www.ugapress.org/.
Posted by UGA Press at 2/16/2015 02:46:00 PM 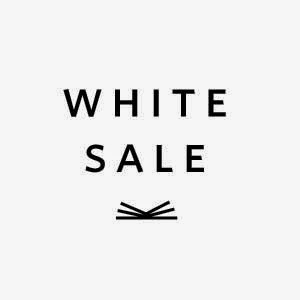 Have you been using the new cooking app from the New York Times and found yourself asking, "where can I get a full cookbook of recipes by Craig Claiborne?" Perhaps you're gearing up for a hike on the Appalachian Trail this spring and need a guide to wildflowers? Or have you been thinking lately, "man, I love Flannery O'Connor, wouldn't if be great to tour sites in Georgia that were important to her? WHAT IF THERE WERE A BOOK THAT COULD GUIDE ME???"

Dear reader, we have solutions. Cheap ones. That's right: we're having a giant white sale with deep discounts on a few of our favorite titles. Books on cooking; books on nature; books on the history of driving in the U.S. ; books on Georgia's architecture and literary history. These books run the gamut of topics we've published over the years and we think they should be owned by as many people as possible.

For the full list of titles, visit the white sale page on our website. And don't forget, there's free domestic UPS ground shipping for all web orders.