Book and CD Supersale. More news to come about this event. For now, pencil in these dates: Thursday, Oct. 5-Friday, Oct. 6, 9 a.m.-5 p.m. both days, Tate Center Plaza on the UGA Campus in Athens, Georgia. The Press will be teaming up with Friends of WUGA for our biennial book and CD sale. Tons of overstocked, slightly damaged, or lovingly used stuff at bargain prices. Start balancing your checkbook now--and stop by here often for updates.


Reader's guides are now available for TOBACCO ROAD and GOD'S LITTLE ACRE, both by Erskine Caldwell.

Nice feature story on Scott Walker and his book HELL'S BROKE LOOSE IN GEORGIA in the Dallas Morning News.

In CREATING THE BIG EASY a native New Orleanian tells how, between the World Wars, the city transformed its image from that of a corrupt and sullied port of call into that of a national tourist destination. Anthony J. Stanonis reveals how boosters and politicians reinvented the New Orleans to build a modern mass tourism industry and, along the way, fundamentally changed the city's cultural, economic, racial, and gender structure.

Kent Germany is another Louisiana native and a former New Orleans resident. In NEW ORLEANS AFTER THE PROMISES Germany goes back to the Great Society era of the 1960s and 1970s to offer a detailed look at one of the greatest transformations in the city's history. He tells how a few thousand New Orleanians pu

t their faith in God and American progress to the test as they sought to conquer poverty, confront racism, establish civic order, and expand the economy. At a time when liberalism seemed to be on the wane nationally, says Germany, black and white citizens in New Orleans cautiously partnered with each other and with the federal government to expand liberalism in the South.

Books for Understanding: New Orleans is a listing of authoritative books on the history, culture, and geography of the city.

Books for Understanding: Hurricane Katrina covers the hurricane itself but also includes books on such timely topics as emergency preparedness and disaster relief.

The H-Urban site is a good place to discover the multifaceted histories of our great cities.
Posted by ddesjard@ugapress.uga.edu at 8/23/2006 08:54:00 AM

Real Snakes on a Real Plane 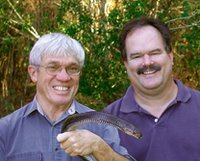 "I've actually taken a snake on a plane and it would have made a very boring film. In the mid-'90s, well before 9-11 and tightened security, I put a single, small gopher snake (Pituophis catenifer), a harmless species like most U.S. snakes, into my coat pocket and flew to Texas, where I turned it over to a colleague. Not much thrill, academically speaking."

In a recent opinion piece in the Charlotte Observer, snake expert Mike Dorcas says to enjoy Snakes on a Plane--but then get real about the mostly harmless creatures on which the movie's plot hinges. Dorcas is coauthor, with Whit Gibbons, of SNAKES OF THE SOUTHEAST (Dorcas [r] and Gibbons [l] are pictured above). 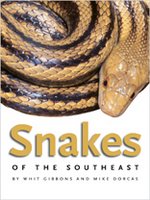 Dorcas' Charlotte Observer piece goes on to raise some thoughtful questions about our perceptions of nature, especially in light of how many people only brush up against something wild when they see it in a movie. "As a scientist," says Dorcas, "I do find it is sometimes a particular challenge for me to enjoy movies that rely on biologically unlikely scenarios to thrill the audience. But am I planning to go see Snakes on a Plane? Of course I am."

Snakes run amok are nothing new to Dorcas, anyway. "My brother and I accidentally let a rat snake go in my mom's car when we were kids (well, older teens). She found it two weeks later as she was driving--when it stuck it's head out of the air conditioning duct."

SNAKES ON A HIGHER PLANE

There is something almost mystical about our connection to snakes: in how we associate them with nature's elemental forces, how we attribute special qualities to their eyes and skin, and how they preside over all phases of our existence, from creation to death to resurrection. THE SERPENT'S TALE includes some fifty diverse and unusual accounts of snakes from cultures across time and around the globe. Editor Greg McNamee has gathered together writings that range from a prayer in the Egyptian Book of the Dead to a Brothers Grimm fairy tale. Suitable for . . . airplane reading?
Posted by ddesjard@ugapress.uga.edu at 8/17/2006 10:31:00 AM

SPIT BATHS, one of our forthcoming Flannery O'Connor Award short story collections, has received a nice review from Publishers Weekly: "A strong sense of style and unfaltering command of his material allow Downs to take the kinds of risks in tone and subject that make his debut a love-it-or-hate-it proposition."

Perry Dilbeck, whose images of truck farmers are collected in THE LAST HARVEST, will have an exhibition at the Callanwolde Fine Arts Center in Atlanta from September 15-October 27, 2006. The opening night reception on September 15 is free and open to the public. The exhibit is part of the annual city-wide event, Atlanta Celebrates Photography.

The current program of the week on the public radio show New Dimensions features a conversation with Thomas Rain Crowe, author of ZORO'S FIELD.

The Georgia Humanities Council has awarded a generous grant to historian and author Craig Pascoe for a series of lectures and group presentations called "Georgia in the 20th Century: Looking at the Past and Considering the Future." The events will take place around the state beginning in early 2007.

Pascoe is a coeditor, with Karen Trahan Leathem and Andy Ambrose, of THE AMERICAN SOUTH IN THE TWENTIETH CENTURY. The book, which touches on an engaging diversity of topics including the USDA's crop spraying policies, Tom Wolfe's novel A Man in Full, and collegiate women's soccer, is the driving force behind the "Georgia in the 20th Century" project. A number of contributors to the book are expected to participate in the events.

Craig Pascoe is an associate professor of history at Georgia College and State University
Karen Trahan Leathem is a historian on the staff of the Louisiana State Museum
Andy Ambrose is executive director of the Tubman African American Museum
Posted by ddesjard@ugapress.uga.edu at 8/11/2006 02:16:00 PM

Eight authors who have been published by the University of Georgia Press will be featured at the first annual Atlanta Journal-Constitution Decatur Book Festival, September 1-3, 2006:

Want to volunteer at the AJC Decatur Book Festival? Email LeAnn Harvey or call her at (678) 553-6548
Catch your breath and then head to the Georgia Literary Festival in Macon on November 3-4
A whole Fall's worth of book festivals

Congratulations to Harold M. Hyman, author of CRAFTSMANSHIP AND CHARACTER. The History News Network has just named him as their latest History Doyen. He's in good company, alongside such giants as Bertram Wyatt-Brown, David Brion Davis, and Bernard Bailyn.

WAKE UP, DEAD MAN by Bruce Jackson is part of a lead feature on Folkstreams.net. This web site is a wonderful repository of hard-to-find documentary films about American folk or roots cultures. Bruce's research on prison work songs resulted in the book Wake Up, Dead Man; the film Afro-American Work Songs in a Texas Prison; and the song compilation, also titled Wake Up, Dead Man, which is available from Rounder Records.

Yet another impressive review of Vincent Carretta's EQUIANO, THE AFRICAN, this time by the journal Eighteenth-Century Studies: "Handsomely illustrated and meticulously researched, Equiano, the African will be read with great interest by those wishing to learn more about the author of one of the late eighteenth-century's most fascinating books."

THE LAST HARVEST, Perry Dilbeck's homage to southern truck farmers, got a mention in a recent newspaper article on rural farm stands. Southern foodie John T. Edge wrote the article. We're publishing The Last Harvest in partnership with the Center for American Places.
Posted by ddesjard@ugapress.uga.edu at 8/02/2006 09:03:00 AM