Lori Ostlund's THE BIGNESS OF THE WORLD is long-listed for The Story prize. Hear Ostlund read from her story "Talking Fowl with my Father" on KQED San Francisco's Writer's Block. Ostlund will read with Robin Ekiss (THE MANSION OF HAPPINESS) at the Sacramento Poetry Center on Monday (2/1) at 7:30 pm; poet and copyeditor Dorine Jennette will emcee and provide red velvet cake.

UGA Press will be at the Savannah Book Festival on Saturday, February 6; our booth will be across Telfair Square from Trinity Church and adjacent to the Georgia Review. Festival events include the following UGAP authors:

The February issue of Atlanta Magazine features reviews of new titles AFRICAN-AMERICAN LIFE IN THE GEORGIA LOWCOUNTRY, edited by Philip Morgan, and RACE AND THE ATLANTA COTTON STATES EXPOSITION OF 1895 by Theda Perdue.

Big NPR weekend: Ian Marshall (WALDEN BY HAIKU) was splendid on Living on Earth, and the story "Departure" by Andrew Porter (THE THEORY OF LIGHT AND MATTER) ran on Selected Shorts.

The Christian Science Monitor reviewed the new paper edition of Porter's collection: "Of all the things to love about The Theory of Light and Matter, Andrew Porter’s wonderful collection of short stories, my favorite is how tenderly his characters treat one another’s failings and vulnerabilities."

The creative nonfiction journal Brevity insists that Sonja Livingston's GHOSTBREAD "captures the adult struggle to remember, the snippets that come to us in the middle of the night."

The site Books of Soul notes that BLACK NATURE was among the top 20 bestselling black books on Amazon in December. A three-day symposium on the book hosted by the Berkeley Institute for the Environment March 4-6 will feature contributors from the book including Harryette Mullen, Carl Phillips, Al Young, Ed Roberson, Evie Shockley, and Natasha Trethewey.

Upcoming area events:
Thursday, February 18 at 7:00 pm, Decatur Public Library
Georgia Center for the Book
in association with the Georgia Association for Historians
Panel discussion on
GEORGIA WOMEN: THEIR LIVES AND TIMES
featuring editors Ann Chirhart and Kathleen Clark
with Michele Gillespie (speaking on Mary Gay)
and Steve Goodson (speaking on Ma Rainey)
Free and open to the public
Posted by ddesjard@ugapress.uga.edu at 1/28/2010 10:03:00 AM 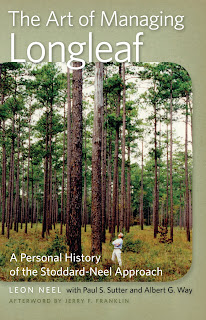 THE ART OF MANAGING LONGLEAF, an account of the life and work of the remarkable forester Leon Neel as told to environmental historians Paul Sutter and Albert Way, has just released from the University of Georgia Press.

“You do not have to spend much time with Leon Neel in the longleaf woodlands that he has managed to learn that they are filled not only with ecological diversity and a potentially sustainable supply of timber but also with stories,” write Sutter and Way in their introduction to the book. “After several years of working with Leon on this project, we are now convinced that those stories are in fact part and parcel of his ecological management approach. Leon has taught us many things, but one of the most important is that if you do not have stories to tell about the lands you work and love, how can you hope to protect them? This book, then, is about the history and tenets of Leon Neel’s approach to land management and the stories that inform it.”

Much of Neel’s recounting focuses on Greenwood Plantation in the Red Hills of south Georgia, which includes a thousand-acre, old-growth, multiage stand of trees known as the Big Woods. Some of the tall, stately trees are more than four hundred years old, and below them is a diverse mix of native grasses and shrubs. Sutter and Way call the Big Woods of Greenwood “arguably the most remarkable stand of longleaf pine grassland remaining in the southern coastal plain,” a region that once included millions of acres of longleaf forest.

Neel, and his mentor Herbert Stoddard before him, managed the Big Woods as a show place for an ecological approach to forestry practice that they pioneered, now known as the Stoddard-Neel approach. Often described as an art informed by science, this set of principles for forest management has been applied to substantial parts of the remnant longleaf woodlands across the coastal plain. It achieves sustainable management of the longleaf pine ecosystem through a combination of prescribed burning, selective logging, and an intimate knowledge of the ecosystem and its processes. This past fall, the Warnell School of Forestry at the University of Georgia presented Neel with the 2009 Distinguished Alumnus award for his lifetime of contribution to innovations in conservation and forest management.

Leon Neel, joined by Paul Sutter and Albert Way will speak about THE ART OF MANAGING LONGLEAF in an event at the Thomas County Historical Society in Thomasville, Georgia on Sunday, February 28 at 3:00 pm. The event is free and open to the public.
Posted by ddesjard@ugapress.uga.edu at 1/28/2010 09:33:00 AM

The radio show Living on Earth will air an interview with Ian Marshall (WALDEN BY HAIKU) this weekend (rescheduled from November). The show will be available online starting Friday evening.

Camille Dungy and BLACK NATURE in the Oakland Tribune. Dungy will appear live on the KPFA radio show Oakland Seen tomorrow (Friday, 1/22) from 8:08-8:30 am Pacific time. Stream it here.

Keith Gilyard, author of a forthcoming biography of radical black novelist JOHN OLIVER KILLENS, appeared on the the radio show Perspective on Killens's birthday (January 14). Archived for the next week at WBAI in New York.

An exhibit featuring the photographs of CITY OF MEMORY, pre- and post-Katrina images of New Orleans by John Woodin, will open tomorrow at Open Lens Gallery in Philadelphia. The book will release in early February.

Kevin McFadden (HARDSCRABBLE) has received the 2010 New Writers Award in poetry from the Great Lakes College Association. As part of the award, McFadden will read at a number of GLCA member campuses.

CRACKERS IN THE GLADE and an article on Marjory Stoneman Douglas by Jack Davis (AN EVERGLADES PROVIDENCE) are featured in a special Everglades issue of Forum, the magazine of the Florida Humanities Council.

THE HORRIBLE GIFT OF FREEDOM
Marcus Wood
In a follow up to Blind Memory, his well-received study of the visual culture of slavery, Wood examines the troubling iconography of emancipation, which often codifies "Liberty" as a white woman handing the gift of freedom to a kneeling, shackled slave. The study covers two centuries of imagery, with special attention to stamps, exhibits, protests and performances relating to the 2007 bicentennial of the Slave Trade Abolition Act.

SOUTH CAROLINA WOMEN, volume 2
Edited by Marjorie Julian Spruill, Valinda W. Littlefield, and Joan Marie Johnson
Volume 2 continues the biographical treatment of interesting women of South Carolina, here exploring the lives of women from the Civil War through the Progressive Era.
Posted by ddesjard@ugapress.uga.edu at 1/21/2010 11:57:00 AM

More Magazine named GLASS CEILINGS AND 100-HOUR COUPLES one of the Best New Books for Working Mothers. The book was also reviewed this week with Equally Shared Parenting at Minnesota Parent. 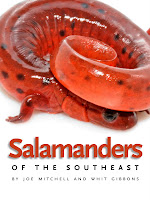 Whit Gibbons received the Clarence W. Watson Award, a prestigious career award for an individual who has made an outstanding contribution to wildlife conservation. The award is jointly presented by the Southern Division of the American Fisheries Society, the Southeastern Section of the Wildlife Society and the Southeastern Association of Fish and Wildlife Agencies. Gibbons is the author or co-author of several UGA Press titles, including the forthcoming SALAMANDERS OF THE SOUTHEAST.

New audio of Robin Ekiss reading poems from THE MANSION OF HAPPINESS now available on the UGA Press YouTube channel. Ekiss will be reading live at Mrs. Dalloway's in Berkeley tonight and at UC Davis on Tuesday. She and Lori Ostlund (THE BIGNESS OF THE WORLD) will read together at the Sacramento Poetry Center February 1.

On H-Net Reviews, an engaging take on Devin Fergus's LIBERALISM, BLACK POWER AND THE MAKING OF AMERICAN POLITICS, 1965-1980: "In his sure to be controversial new book, Fergus takes on just about everyone in arguing that we have all gotten the story wrong, mainly because historians have been toiling away in separate vineyards, operating on untested assumptions, failing to look in the right places for evidence, and often misinterpreting the evidence they have."

UNDERSTANDING LIFE IN THE BORDERLANDS
Edited by I. William Zartman
Studies in Security and International Affairs
This interdisciplinary collection of essays explores border areas between states in ten case studies that attempt to better understand these borderlands.
This Tuesday, Zartman and the book will be featured at a roundtable panel on Borders, Security Sector Reform and International Assistance at the Henry L. Stimson Center in Washington.

REAL PHONIES: CULTURES OF AUTHENTICITY IN POST-WORLD WAR II AMERICA
Abigail Cheever
An engaging analysis of authenticity and the self in the latter half of the last century built around five key kinds of characters from literature and film: adolescents, the insane, serial killers, and the figures of the assimilated Jew and the “company man.”

Upcoming Georgia events:
Thursday, January 21, at 7 pm
Reynolds Plantation, Greensboro, GA
David S. Williams will discuss FROM MOUNDS TO MEGACHURCHES
The event is free and open to the public.
Posted by ddesjard@ugapress.uga.edu at 1/14/2010 11:47:00 AM

BLACK NATURE has just been announced as one of five nominees for the NAACP Image Awards in the category of Outstanding Literary Work - Poetry. The awards ceremony will air on Fox on February 26 at 8 pm.

The book is also reviewed recently in Library Journal, the Baltimore Sun, and Orion Magazine ("How strong is this neglected poetry? The answer: as strong as American poetry overall--and maybe stronger, given the creative resistance evoked by African-American history, both long past and recent").

LIBERALISM, BLACK POWER AND THE MAKING OF AMERICAN POLITICS, 1965-1980, by Devin Fergus ("Fergus has fingertip knowledge of North Carolina during this era and does a masterful job of navigating the often-complex contours of Tar Heel politics...An outstanding work.")

SCREENING A LYNCHING: THE LEO FRANK CASE ON FILM AND TELEVISION by Matthew H. Bernstein ("In this brilliant examination, Bernstein examines the racist thread that kept open the case and its treatments in the media....This book deserves the widest possible audience.")

Southern Spaces features an excerpt from LeeAnn Lands's THE CULTURE OF PROPERTY.

Brack's edition of Hawkins's THE LIFE OF SAMUEL JOHNSON discussed in a Times Literary Supplement article on "Samuel Johnson restored to his proper size and place."

The Winter 2009 issue of the SC Historical Society's magazine Carologue features an article by Alexander Macaulay (MARCHING IN STEP) on "The Controversy at the Citadel." The Macon County (NC) News featured an article on Macaulay and the book.

The new Athens Magazine profiles Philip Lee Williams and Judith Ortiz Cofer, both soon to be inducted into the Georgia Writers Hall of Fame. Both authors have several titles with UGA Press.

Susan Larson of the New Orleans Times-Picayune named LOUISIANA WOMEN one of the ten best local books of the year.

Interview with Andrew Porter in The Practicing Writer in conjunction with the release of the release of THE THEORY OF LIGHT AND MATTER in paper from Vintage this week.
Posted by ddesjard@ugapress.uga.edu at 1/07/2010 09:23:00 AM