Diane Mutti-Burke launched ON SLAVERY'S BORDER, the inaugural book in our Mellon-funded collaborative series Early American Places, to a crowd of 300 at an event at the Kansas City Public Library. She was interviewed about the book, which examines small slaveholding households in Missouri in the years prior to the Civil War, on KCUR's KC Currents.

JOHN OLIVER KILLENS by Keith Gilyard has been selected as an honor book in the category of nonficition by the Black Caucus of the American Library Association. The selection committee noted: "Gilyard presents a well researched portrayal of Killens as novelist, teacher, essayist and founding chair of the Harlem Writers Guild. This is the first biography of John Oliver Killens and a significant contribution to the understanding of his influence as an African American writer activist."

For a foretaste of this spring's CIVIL RIGHTS HISTORY FROM THE GROUND UP, check out editor Emilye Crosby on WOSU's All Sides with Ann Fisher, interviewed alongside Hasan Kwame Jeffries and Lauren Araiza.

BLOOMBERG'S NEW YORK featured in The Architect's Newspaper: "A city built only for the 'elites' means that if they go down, we all go down."

Co-author Barry Brown interviewed about CROSSROADS OF CONFLICT: A GUIDE TO CIVIL WAR SITES IN GEORGIA by Rickey Bevington for Georgia Public Broadcasting.

Several UGAP titles reviewed in the newest Journal of American History, including Catherine Randall's FROM A FAR COUNTRY ("A welcome addition to the small but growing body of scholarly work that examines the French Protestant experience from an Atlantic world perspective") and Theda Purdue's RACE AND THE ATLANTA COTTON STATES EXPOSITION OF 1895 ("Perdue offers amazingly detailed descriptions of the exhibits presented at the fair, walking readers through the sights and sounds of the attractions as fairgoers would have seen them in 1895, except with the addition of perceptive interpretations of the cultural significance of the displays.")

CHOICE Reviews for Academic Libraries highly recommends THE HORRIBLE GIFT OF FREEDOM ("Wood's analysis of popular 19th-century iconography is thorough, sharp, and disillusioning"), JURY DISCRIMINATION ("a solid work of scholarly history as well as an intelligent rumination on deeply rooted racial prejudice") and AFRICAN AMERICAN LIFE IN THE GEORGIA LOWCOUNTRY ("This splendid collection illuminates an aspect of African American culture that has been neglected in the past.")

The February issue of Vanity Fair includes Natasha Trethewey (BEYOND KATRINA) in a photo shoot of Atlanta writers ("Belles, Books and Candor").
Posted by ddesjard@ugapress.uga.edu at 1/27/2011 05:49:00 PM 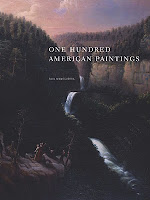 Like all Georgians, we at UGA Press are looking forward to our first peek at the reopened Georgia Museum of Art after eleven months of construction on its Phase II expansion. UGA Press is proud to partner with the museum in distributing ONE HUNDRED AMERICAN PAINTINGS by Paul A. Manoguerra to coincide with the week of events and festivities marking the reopening. With entries by Janice Simon, Lynn Boland, and William U. Eiland, the catalogue features one hundred significant American paintings drawn from the museum’s collection of more than 8,000 art objects that, for the first time, will be on continual display in the building’s new permanent-collection galleries. We are also distributing TRACING VISION, which showcases modern drawings from the museum's permanent collection.

Congratulations to Catharine Randall, whose book FROM A FAR COUNTRY has won this year's award for the best book on Huguenot history from the National Huguenot Society.

The Dec/Jan issue of Garden and Gun mentions the soon-to-be-released SOUTHERN CROSSINGS, photography by geographer David Zurick, and PHILIP JURAS: THE SOUTHERN FRONTIER, LANDSCAPES INSPIRED BY BARTRAM'S TRAVELS, an exhibit opening at the Telfair in Savannah January 28.

San Francisco Chronicle on JACK LONDON, PHOTOGRAPHER: "There is a luxurious quality to the thick, creamy pages that is in stark contrast to the frequently haunting images of poverty, war and earthquake. But by no means is this book a depressing slice of life." Also noted at the Los Angeles Maritime Museum blog.

BEYOND KATRINA reviewed in Orion Magazine; PLEASE COME BACK TO ME on Bookslut: ‎"Each of the eight stories in this collection stands on its own, but together, this assemblage of portraits of strikingly raw humans provides a depth of feeling and detail that will keep the reader captivated and longing to observe these characters for just a bit longer."

SFA COMMUNITY COOKBOOK in the Chicago Reader's Top Ten Books for Cooks and in the Pittsburgh Post-Gazette.

Prairie Schooner delights that Sue Silverman's how-to guide FEARLESS CONFESSIONS "is conversational and engaging throughout, never lapsing into the dry instruction-manual voice that could have endangered this book. Interwoven inseperably from her observations about how to write memoir is Silverman's articulate and spirited defense of the genre's legitimacy."

Elevate Difference (formerly Feminist Review) on MARION MANLEY: MIAMI'S FIRST WOMAN ARCHITECT: "an overdue tribute to a woman who accomplished so much so far ahead of her time."

Peter Carroll blogs about the reissue of his book KEEPING TIME, the memoir of a professional historian, part of our program of bringing backlist titles back into print.

COMPANY TOWNS IN THE AMERICAS
Edited by Oliver J. Dinius and Angela Vergara
Transnational thinking about the history of company towns in Argentina, Brazil, Chile, Mexico, the U.S., and Canada
Posted by ddesjard@ugapress.uga.edu at 1/06/2011 12:15:00 PM