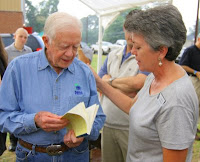 Dorinda Dallmeyer presents President Jimmy Carter with a copy of her book ELEMENTAL SOUTH: AN ANTHOLOGY OF SOUTHERN NATURE WRITING. Dallmeyer and Carter met at a Paddle Georgia event in Oglethorpe, Georgia, where a week-long trip on the Flint River ended with a fish fry. Carter was present to officially announce the formation of the Flint Riverkeeper group.

Dallmeyer directs the Environmental Ethics Certificate Program at the University of Georgia. Dallmeyer's passion for the natural South led her to form the Southern Nature Writers Project, an organization devoted to thinking and writing about the southern landscape.

Andrew Porter, author of THE THEORY OF LIGHT AND MATTER, will appear on "Three Books . . ." the popular NPR segment for which writers are invited to recommend three great reads on a single theme. Porter's piece will be airing in the next few days.

THE THEORY OF LIGHT AND MATTER is a winner of the prestigious Flannery O'Connor Award for Short Fiction. Marilynne Robin

son, Pulitzer Prize-winning author of Gilead, has written that "Porter's fiction is thoughtful, lucid and highly controlled. It is especially striking for the strong consistency of vision that is achieved in every story. He has the kind of voice one can accept as universal—honest and grave, with transparency as its adornment."

Images:
Left: Andrew Porter by Kris Krajcer
Right: Jacket of The Theory of Light and Matter
Posted by ddesjard@ugapress.uga.edu at 7/29/2008 01:20:00 PM 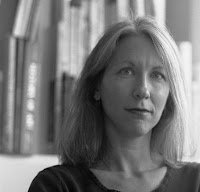 The likely site of George Washington's boyhood home has been unearthed near Fredericksburg, Virginia. It's a great story, and a well deserved plug for the work of archaeologists and historians. Deep in most of the media coverage, past the musings over whether we'll ever find young Washington's hatchet or the stump of the apocryphal cherry tree, is news of a plan to reconstruct the home and its outbuildings as they may have looked in the 1740s, when Washington was living there.

In HERE, GEORGE WASHINGTON WAS BORN, Seth C. Bruggeman tells of a similar project—the reconstruction of the Washington birthplace. He uses the controversial legacy of the birthplace site to raise questions about "memory, ownership of the past, and the wonderfully slippery meaning of authenticity." "All kinds of Americans at all times seek to involve themselves in the past," says Bruggeman. He asks what compels us to make pilgrimages to places like the Washington birthplace, and urges us to think critically about our need to be grounded in history through seeing and touching the "real" thing. HERE, GEORGE WASHINGTON WAS BORN, which will be published in November 2008, has been praised as a "fascinating tale of the elusive quest for authenticity at a modern American tourist site" by David Glassberg, author of Sense of History: The Place of the Past in American Life.

T. H. Breen takes on similar issues in IMAGINING THE PAST, in which he writes that "our dreams of things to come are built upon the interpretation of past experience." IMAGINING THE PAST tells of Breen's historical research in the celebrated Long Island resort town of East Hampton and what happened when some of his discoveries collided with local, dearly held notions about East Hampton's early days. "Through Breen's eloquent writing," said Charles E. Orser, Jr., in the Journal of American History, "the past becomes the present, and readers learn that the stories we tell ourselves about the past are fluid and changeable."

A good deal of excavating—in textual repositories—also went into the making of LIFE OF GENERAL WASHINGTON. Written by David Humphreys, one of Washington's aides, it is the only biography authorized by the general himself. In a remarkable feat of historical detective work, editor Rosemarie Zagarri assembled manuscripts from three separate archives to reconstruct the complete biography. George Athan Billias's review in the Journal of American History says that "it not only contributes to the Washington canon but also helps us to separate more critically the man from the myth."