Trick-or-Treat: Give us frightening books to read!

Looking to read something that gets you in the Halloween spirit? Check out one of these spook-tacular titles that are sure to bring on the chills! 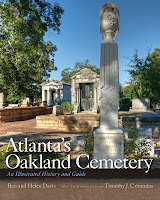 "[I]f you can't go to Oakland, then definitely invest in your own copy of ATLANTA'S OAKLAND CEMETERY. It's a wonderful journey through Atlanta's history and you won't regret educating yourself about Atlanta's rural cemetery garden." If you missed the Halloween tours at Oakland Cemetery, follow Paranormal Georgia Investigations' recommendation and pick-up a copy of ATLANTA'S OAKLAND CEMETERY. (For Halloween, we suggest reading the book while in costume!)

GHOSTS AND GOOSEBUMPS is a rich collection of folktales and superstitions that capture the oral traditions of central and southeastern Alabama. The spirits of treasure-keepers, poltergeists, murderers and the murdered, wicked men and good-men-and-true float through the book’s first section.


Ten Things to Know About the Ghosts

2. Ghosts never speak unless spoken to.

3. Ghosts hardly ever appear in the daytime, usually at midnight.

6. All dogs can see ghosts. If you want to see one, get behind a dog at midnight and look between his ears.

7. If you wish to speak to a certain ghost, go to its grave and walk around it backward twelve times.

8. If you want an easier way, go at midnight and call them by their first name.

9. If you meet a ghost walk around it nine times and it will disappear.

10. If you're running from a ghost, if you have the chance, run over a bridge; ghosts can't travel over running water.

Rita Shaw (from GHOSTS AND GOOSEBUMPS)

In a starred review, Publishers Weekly aptly summarizes these haunting tales. "The best stories pair childhood idylls with horrific murder: a teacher and her student are terrorized by vicious killers in 'Meat and Mouth'; a man returns to his childhood house to learn that his next-door neighbor, once a figure of erotic fixation, has been hacked to pieces, in 'Smiling Down at Ellie Pardo'; the father in 'After the Flood' tries to account for his stunted stepson’s destructive impulses. . . . A little violence goes a long way and the lurking fear at the heart of these stories elevates them beyond the merely promising to reveal a wicked new talent."

Email ThisBlogThis!Share to TwitterShare to FacebookShare to Pinterest
Labels: In the News, Seasonal

A review of Hugh Sheehy's THE INVISIBLES appears in the Atlanta Journal-Constitution:
"Left behind, the characters in THE INVISIBLES try to make sense of what remains. . . . [Y]ou’ll remember them all — Sheehy’s finely crafted genre-bending mash-up of thrillers, fairy tales, realism and children’s stories makes sure of it. . . . Fairytale and folkloric elements create a timeless, mythical atmosphere more Grimm than grits, a place where even the most contemporary characters, teens desperate to stand out from the crowd, come across like a gothy Hansel and Gretel."

PLOP! Review names THE INVISIBLES as a noteworthy book for 2012. "Sheehy has done his homework, and this collection is a sharp, relevant, and exquisite first entry that deserves what critical acclaim it can muster.  I am on the edge of my seat for Sheehy’s next book – a novel, I suspect – but for now, THE INVISIBLES is hands down my recommendation of the year."


Michele Gillespie received a "key to the city" of Mount Airy, NC. The key was presented to Gillespie "in appreciation of the courtesy that she has shown to local collections and collectors of historical materials including the Mount Airy Public Library, the Mount Airy Museum of Regional History, and the Raven Knob Boy Scout Museum. The presentation honored Dr. Gillespie's application of serious, academic, historical research skills to local topics during the writing of her book, KATHARINE AND R. J. REYNOLDS."

An interview with THE FAITHS OF THE POSTWAR PRESIDENTS author David Holmes appears in the November issue of U.S. Catholic magazine.

What role is religion playing in the current presidential campaign?

It’s less important than I thought it would be. At first it looked like Mitt Romney’s membership in the Church of Jesus Christ of Latter-day Saints would be a major issue, but we’re far enough into the campaign now to see that it’s not going to be.

I thought Barack Obama’s lack of consistent church attendance might become an issue, too, but no. Traditional values and social values are important, and they spring out of religion, but not religious affiliation itself.

The Civil War Monitor interviews WAR UPON THE LAND author Lisa Brady about her book and the future of environmental studies of the Civil War. The video interview is available here.
Posted by UGA Press at 10/23/2012 04:47:00 PM

In the News: Walton Harris Retiring from the University of Georgia Press

After 18 years at the University of Georgia Press, Walton Harris will retire from the design and production department at the end of October.

"All of the Press staff will miss Walton's great sense of humor, above-the-call-of-duty dedication, and wonderful inventiveness in playing his part in the making of our books,” said Kathi Morgan, assistant director for design and production at UGA Press. “His design and production colleagues will especially miss Walton's appreciation of the craft of design, typography, composition, appropriate color palettes, use of quality materials, and fine manufacturing technology and techniques so each book could be enjoyed and treasured.  We wish him—and his family—well during the next phase of his life beyond the office!”

As book designer, production manager, and production specialist at the Press, Harris has managed more than 800 titles through production and designed and composed more than 160 titles since 1994.

“I will always be grateful to Walton for all that he did for our department, the Press, and for me from 1994 through 2005 when we worked together in design and production,” said Sandy Hudson, former assistant director for design and production at UGA Press. “Organized, thorough, detail-oriented, a team player, someone who appreciates others and treats people with respect—Walton was and is a superb production coordinator. Dedicated, focused, and hardworking, Walton can always be counted on to do a great job and to carry through on any project.”

After receiving his BFA from the University of Georgia, Harris made many one-of-a-kind books and other works of art. His work has been exhibited at the Lucky Street Gallery, Heath Gallery, and Nexus Contemporary Art Center. Some of his books are in the collections of the High Museum of Art, New York Museum of Modern Art, and in private collections.

Harris’s publishing career began in 1977 when he cofounded Nexus Press, a fine arts publisher specializing in limited edition artist’s books. From 1980 until 1991, Harris wrote, designed, directed, and performed original works for the Center for Puppetry Arts in Atlanta, including Dinosaurs, Aladdin, Once Upon A-bomb, The Box, Cirque Pataphysique, and Bad Sax. His show, The Box, was invited to the International Puppet Festival in Boston, MA in 1989, and the Atlanta Journal-Constitution declared it the “most creative and original dramatic performance” in the 1989 year-end theater review. Harris went on to cofound the animation studio Vivid Pictures in 1992. 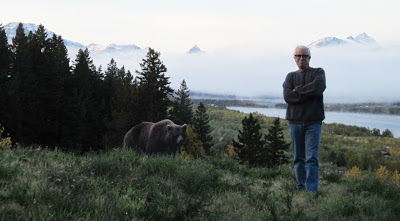 Mick Gusinde-Duffy, current senior acquisitions editor at Temple University Press, has been named assistant director and editor-in-chief of the University of Georgia Press effective November 1. Gusinde-Duffy has more than 15 years of acquisitions experience. His time has been split between conventional academic and professional book publishing and experimental electronic publishing initiatives.

Founded in 1938, the UGA Press is the largest book publisher in the state. It has been a member of the Association of American University Presses since 1940. With a full-time staff of 24 publishing professionals, the Press currently publishes 80-85 new books a year and has more than 1,500 titles in print. It has well-established lists in Atlantic World and American history, American literature, African-American studies, southern studies and environmental studies, as well as a growing presence in the fields of geography, urban studies, international affairs and security studies.
Posted by UGA Press at 10/17/2012 01:15:00 PM

Publishers Weekly review of E. J. Levy's LOVE, IN THEORY. "A master of [her] form. . . . Levy is skilled at bringing [her] characters to life, each story searingly made real through [her] subtlety and fastidious attention to detail."

The Post and Courier also considers Levy a master of her craft, proclaiming, "Levy is a master at holding readers in her grasp until the final sentence."

According to the Life in Review blog, LOVE, IN THEORY "is a captivating short story collection," and "[t]he writing is outstanding." The reviewer "very highly recommend[s] this book!"

The Aiken Standard praises Charles Seabrook's "enthusiasm" in THE WORLD OF THE SALT MARSH. "The reader is along for the ride in this celebration of one of the most magnificent natural habitats in the world. . . . Seabrook’s book is written from the perspective of someone who deeply appreciates the natural habitat with which he is clearly so familiar. Part of the charm of the book is the author’s presentation of some of the people. . .whose livelihoods depend upon a healthy salt marsh."

The Southern Festival of Books is happening this weekend (October 12-14) in Nashville, TN. We will be in booth #19.

We have a lot of author events happening this weekend. Be sure to make your calendars!

Congratulations to THE INVISIBLES author Hugh Sheehy for having his book named as one of the exciting new books listed in Publishers Weekly's "Best Book Day for 2012" round-up.

"Sheehy's stories seem to glow in the dark, and reading them feels a little like watching fireflies light up at night. . . . Sheehy's characters call out to be seen, and in those moments, they appear, as if out of the darkness, on dazzling display."—The Rumpus

The Winston-Salem Journal shares why Michele Gillespie chose to write a book on Katharine and R. J. Reynolds. Gillespie said, "I thought to myself, ‘these two really were partners in ways that we don’t typically look at marriage, even among elites in the early 20th-century South.’ I had a bigger story here than just telling the life’s story of one of them without the other.”

"Robin Hemley has written an excellent book on immersion writing. . . . He writes with humour and passion and injects himself into the prose, thus making for a great example of what he is describing."—M/C Reviews

Congratulations to Dave Lucas! His book, WEATHER, is the winner of the 2012 Ohioana Award for Poetry. The award is "given annually to recognize and honor outstanding books published the previous year by authors who were born in Ohio or who have lived in Ohio for at least five years, the exception being a book about Ohio or an Ohioan."

Congratulations to Melinda Moustakis! Her book, BEAR DOWN, BEAR NORTH, has been named a finalist for the Fiction Award from the Washington State Book Awards.

If you are a fan of Robert Hass and his new book, WHAT LIGHT CAN DO, be sure to pick up a copy of Camille T. Dungy's BLACK NATURE. Hass dedicates an entire chapter in his new collection to BLACK NATURE.

The Press is grieved to hear of the passing of two Press authors: Eugene Genovese, author of A CONSUMING FIRE, and Neil Smith, author of UNEVEN DEVELOPMENT, and series advisory board member for the Geographies of Justice and Social Transformation series. The funeral mass for Genovese was in Atlanta on October 2, with a private burial to follow in New York.
Posted by UGA Press at 10/04/2012 01:05:00 PM