Andrew Porter’s THE THEORY OF LIGHT AND MATTER has been named a finalist for the 2009 Writers League of Texas Book Award.

September’s Mobile Bay Monthly features John Sledge’s forthcoming illustrated book on the Greek Revival architecture of Mobile, THE PILLARED CITY. An interview with Sledge will air on Mobile’s NPR station on Monday, Sept. 28, and a companion exhibit at the Museum of Mobile opens with a book launch October 8.

Seth Bruggeman’s HERE, GEORGE WASHINGTON WAS BORN positively reviewed in History News and in a forthcoming issue of Material Culture; Choice calls it “a fascinating administrative history.” In The Public Historian, Michael Kammen wrote: “The author has done so much thoughtful work providing context (especially concerning the influence of the Colonial Revival and the evolution of National Park Service policies) that the book really is a ‘must read’ for many public historians. It is also a significant contribution to the flourishing field of memory studies.”

The Public History Podcast from the University of Central Florida features Jack Davis and AN EVERGLADES PROVIDENCE, and poses the question: is it possible to think of the Everglades as a giant public history exhibit, with Marjory Stoneman Douglas as its curator?

NEW ORLEANS AFTER THE PROMISES highlighted as one of “The Best Books About New Orleans” in The Daily Beast.

Poetry news: Orion Magazine on QUIVER by Susan B.A. Somers-Willett: “Anyone fascinated by what comes of the passionate coupling of science and art will devour this collection of poems. Somers-Willett's poetic imagination plumbs the wonders and mysteries of dark matter, relativity, atomic physics, and natural history with lyricism, reverence, and delight.” FIELD FOLLY SNOW by Cecily Parks reviewed in New Letters: “This poetry collection demands close reading and deep engagement to follow its levels of found material and its internal discoveries, and these poems are worth the effort.”

The Journal of American History reviews DIXIE EMPORIUM: “This delightfully entertaining tour of the South reveals much about the processes of consumption, identity, and memory that apply well beyond the geographical and cultural boundaries of Dixie. But reader beware: do not attempt to enjoy this collection on an empty stomach. A hankering for a Krispy Kreme could arise. Nevertheless, it is a must for scholars of the South or cultural history."

UGA Press authors and books will be featured at several fall book festivals:

Jim Lorence (THE UNEMPLOYED PEOPLE’S MOVEMENT) will share the stage with David A. Taylor (Soul of a People) at the Wisconsin Book Festival Oct.11.

Three different panels at the Louisiana Festival of the Book on October 17 will highlight LOUISIANA WOMEN – two featuring different contributors to the volume and one focusing on journalist Elizabeth Meriwether Gilmer, a.k.a. Dorothy Dix.

Jack E. Davis will showcase AN EVERGLADES PROVIDENCE at the St. Petersburg Times Festival of Reading October 24 and the Miami Book Fair November 14.

This Saturday, September 26, at 4 pm, the Auburn Avenue Research Library on African American Culture and History, a special library within the Atlanta-Fulton County Library System, will host an authors' discussion on the 1906 Atlanta race riot, one of the most brutal in American history.

The event will feature Rebecca Burns, author of RAGE IN THE GATE CITY, and author/educator June Dobbs Butts, daughter of prominent African American leader John Wesley Dobbs (and contributor of a foreword to Burns's book.) The discussion will be moderated by Georgia State history professor Clifford Kuhn (LIVING ATLANTA).

The event is free and open to the public and will be held in the Authors' and Writers' Lounge on the third floor of the library.
Posted by ddesjard@ugapress.uga.edu at 9/22/2009 04:03:00 PM

From a roundup of new Samuel Johnson titles in the New York Review of Books:

"A new, corrected, and annotated edition of Hawkins's The Life of Samuel Johnson LL.D, first published in 1787, and edited by O.M. Brack Jr., was reissued this summer by the University of Georgia Press. This edition is—as Johnson once said of a previous work by Hawkins on Izzak Walton—'very diligently collected, and very elegantly composed. You will...not wish for a better.' Professor Brack deals with the question of Hawkins's 'asperity' toward Johnson in his introduction. 'Hawkins had to decide if he was going to write a panegyric on Johnson or produce a life....Hawkins esteemed Johnson, but he esteemed truth more.'"
Posted by ddesjard@ugapress.uga.edu at 9/18/2009 09:46:00 AM

Today marks the three hundredth anniversary of the birth of Samuel Johnson, English lexicographer, biographer, essayist, and poet. Celebrations and reexaminations of Johnson’s life and work have been taking place this year all over the world. 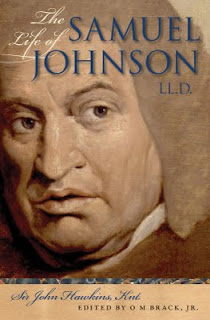 In commemoration of this event, the University of Georgia Press has released the first scholarly edition of Sir John Hawkins’s THE LIFE OF SAMUEL JOHNSON, LL.D., edited by noted Johnson scholar O M Brack, Jr. Brack’s introduction and annotations supply a context for reading Hawkins’s Life, which complements, clarifies and often corrects the better-known and later Life by James Boswell.

Brack and six other noted Johnson scholars will take part in a one-day symposium at Emory University to discuss Hawkins's Life, sponsored by Emory’s Bill and Carol Fox Center for Humanistic Inquiry and the University of Georgia Press:

The event is FREE AND OPEN TO THE PUBLIC but space is limited.
Please register if you plan to attend by e-mailing Martine Brownley, director of the Fox Center, at martine.brownley@emory.edu.
Posted by ddesjard@ugapress.uga.edu at 9/16/2009 12:58:00 PM 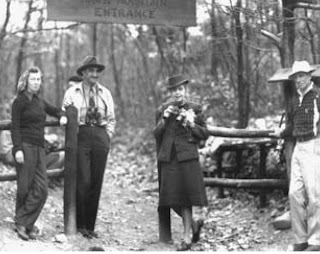 Hawk Mountain Sanctuary in eastern Pennsylvania celebrated its 75th anniversary this weekend. Despite the downpour, more than 100 visitors turned up to hear author Dyana Furmanksy (ROSALIE EDGE, HAWK OF MERCY) recount the life of socialite-turned-hellraiser Rosalie Edge, who was instrumental in founding the sanctuary.

Furmansky’s biography of Edge chronicles the struggle for conservation at Hawk Mountain -- one of the best places in the northeastern United States to witness the annual hawk migration -- as well as other aspects of Edge's remarkable career: she fought for both Olympic and Kings Canyon National Parks and inspired the founders of such organizations as the Nature Conservancy and the Environmental Defense Fund. 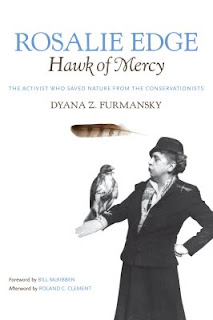 Furmansky will return to Hawk Mountain September 26 at 6 pm as a speaker in their Autumn Lecture Series.

She will speak at Tattered Cover in Denver on October 3 as part of their Rocky Mountain Land Series, at New York Audubon October 13, and at Chicago Audubon October 25.
Posted by ddesjard@ugapress.uga.edu at 9/15/2009 04:42:00 PM 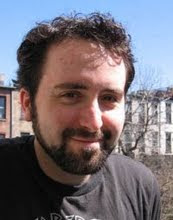 The National Poetry Series has officially announced the results of the 2009 Open Competition, and the University of Georgia Press is delighted to announce that judge David Wojahn has selected Colin Cheney's manuscript HERE BE MONSTERS for publication by the press in spring 2010.

Cheney, in addition to writing poetry, curating the Chin Music reading series, and teaching expository writing at NYU, builds rooftop gardens and meadows in Brooklyn. He received a Ruth Lilly Fellowship from the Poetry Foundation in 2006. His poems have appeared widely in journals; read a few online from Poetry, Ploughshares, and the Kenyon Review Online.

Other winners of this year's competition are:

Julie Carr, Sarah - Of Fragments and Lines
Chosen by Eileen Myles, to be published by Coffee House Press

Jena Osman, The Network
Chosen by Prageeta Sharma, to be published by Fence Books 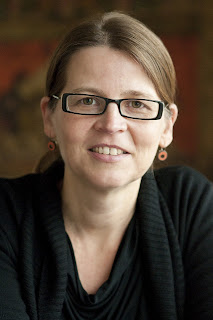 Congratulations to Lori Ostlund, one of six recipients of this year’s Rona Jaffe Foundation Writer’s Awards.

Intended to identify, encourage and support excellent women writers in the early stages of their careers, Writer’s Awards include a monetary award of $25,000. The six winners will receive their awards at a ceremony in New York September 24.

Ostlund’s first book, THE BIGNESS OF THE WORLD, received last year’s Flannery O’Connor Short Fiction Award and has just released. A Booklist review noted, “Witty and sharp, Ostlund has crafted 11 surprising and often very funny tales that remind us just how vast the world really is.” A starred review in Publishers Weekly this week concluded, “Each piece is sublime.”
Posted by ddesjard@ugapress.uga.edu at 9/02/2009 05:26:00 PM 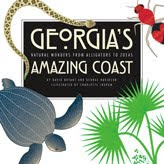 The summer issue of Coastwatch, the magazine of the North Carolina Sea Grant, features an in-depth article on “Our Amazing Coast” workshops for elementary school teachers held across North Carolina this past school year. Designed to help educators engage young learners with science using hands-on materials, the “Our Amazing Coast” curriculum was first piloted in Georgia and is based on the book GEORGIA’S AMAZING COAST, published by the University of Georgia Press in association with Georgia Sea Grant.

The book, written by David Bryant and George Davidson, is uniquely structured with one hundred self-contained plates each featuring a coastal creature with its common and scientific name and a brief, engaging yet informative description that helps capture the attention of younger readers. The accompanying curriculum, written by Georgia teacher Becci Curry for the Center for Ocean Science Education Excellence-Southeast, explicitly targets Georgia science standards for grades 3, 4 and 5 and extends the book’s usefulness with challenges like the “Coastal Marsh Survival Game” or organizers to help students classify the organisms found in the book.
Posted by ddesjard@ugapress.uga.edu at 9/02/2009 05:02:00 PM