In the News: Amina Gautier and her new book, At-Risk 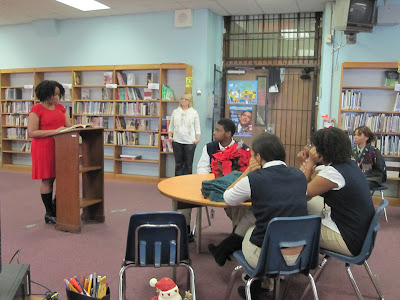 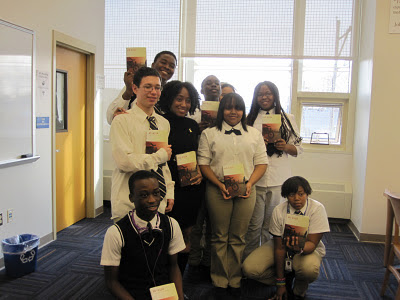 She read selections from her new book, AT-RISK, and spoke with students. Gautier, who is a University of Pennsylvania alumna and former assistant professor at Saint Joseph’s University, is currently on faculty at DePaul University. 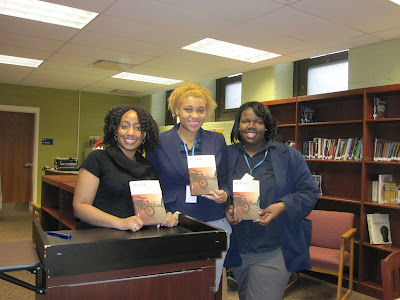 The stories in AT-RISK are set in Brooklyn, where Gautier herself grew up, and focus on the lives of young African Americans who might all be classified as ‘at-risk,’ but who encounter different opportunities and dangers in their particular neighborhoods and schools and who see life through the lens of different family experiences. 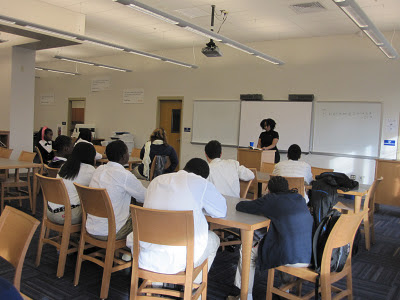 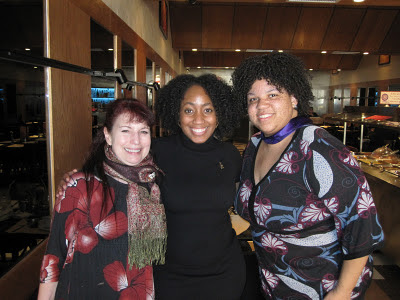 Gautier has several upcoming events in Ohio, Illinois, and Richmond.

The February issue of Essence recommends Vincent Carretta’s PHILLIS WHEATLEY. According to Senior Books Editor Patrik Henry Bass: “I have a new appreciation for the colonial poet. You will as well. Author Vincent Carretta offers an extensive look at Wheatley and discovers that the enigmatic Senegalese talent was nobody’s puppet. Wheatley was about 31 when she died impoverished in 1784, but her recently discovered poems offer a glimpse of a remarkable talent way ahead of her time.”

The Massachusetts Historical Society’s blog, The Beehive, claims that PHILLIS WHEATLEY “introduce[s] provocative ideas regarding Wheatley and her family that will likely spark debate among historians for years to come.”

A January book review in the Post and Courier has John Lane’s book MY PADDLE TO THE SEA being celebrated for its “beautifully written and lyrical” prose as well as its “intimate look at the vanishing wilds of [South Carolina and] the author’s own life.”

Fairbanks Daily News-Miner features an interview with Melinda Moustakis about her book, BEAR DOWN BEAR NORTH.

In Flycatcher: A Journal of Native Imagination Karen Pickell praised David Lucas for his collection WEATHER, saying that “[t]he poems of Weather have been polished, and I expect they will shine for quite a long time.”

In a recent copy of the Journal of Asian Studies Charles Horner was applauded for his book RISING CHINA, which “charts the complexities of China’s many hopes, dreams, anxieties and ambivalences.”

Nishani Frazier, in a recent issue of the Journal of American Ethnic History, reviewed CARRY IT ON by Susan Youngblood Ashmore and said that her “book is well worth the read.”

January 12th was both Jack London’s birthday and the opening of the new exhibit “Jack London, Photographer” at the MaritimeMuseum of San Diego. The exhibit was inspired by Jeanne Campbell Reesman, Sara S. Hodson, and Philip Adam’s JACK LONDON, PHOTOGRAPHER.

Kyle Dargan, author of LOGORRHEA DEMENTIA, BOUQUET OFHUNGERS, and THE LISTENING, comments on Washington’s literary community and the relationship between poetry and government in this video featured on TheWashington Post.

Congratulations to Joseph Smith, author of BRAZIL AND THE UNITED STATES, and Mischa Honeck, author of WE ARE THE REVOLUTIONISTS. Their books have been selected for inclusion in Choice's Outstanding Academic Title list.

WE ARE THE REVOLUTIONISTS continues to garner praise, with T.K. Bryan from Choice asserting that “Honeck expands understanding of not just the antebellum abolitionist movement, but also conceptions of race and nationality in the mid-19th century.”

Editors Sharon M. Harris and Robin L. Cadwallader were commended in H-Net Reviews for “the value of the anthology” REBECCA HARDING DAVIS’S STORIES OF THE CIVIL WAR ERA and for the anthology’s “thematic importance” in addressing “a range of disciplines, including literary studies, Civil War history, Southwestern border studies, cultural anthropology, women’s studies, and gender studies.”

Laura Barraclough was heralded for her book MAKING THE SANFERNANDO VALLEY in a recent copy of the Journal of Historical Geography. Admiring her insights into “discerning how those linking suburbia to the mythic west have managed purposefully to construct racial identities and maintain white privilege in the San Fernando Valley (and elsewhere in the west),” the reviewer, Ronald Davidson, even placed the book alongside “important histories of the region by Kevin Starr, Robert Fogelson, William Fulton, Becky M. Nicolaides, and too few others.”
Posted by ddesjard@ugapress.uga.edu at 1/13/2012 11:37:00 AM

Email ThisBlogThis!Share to TwitterShare to FacebookShare to Pinterest
Labels: Awards, In the News, Interviews, Reviews

A call for studying the recent past

Reporting from the annual meeting of the American Historical Association (AHA), Inside Higher Ed notes that esteemed historian and blogger Juan Cole called upon the profession to make its work relevant by writing about the recent past.

"Historians have an important role to play in adding depth and sophistication to our understanding of events when they do their work, yet many are reluctant to examine recent events, Cole said. Some historians are not comfortable dealing with the recent past and think that some topics are either too hot to touch or difficult to examine more than superficially because they were recent."

The University of Georgia Press has taken a leading role in promoting exactly this sort of work through its new series SINCE 1970: HISTORIES OF CONTEMPORARY AMERICA, and especially through the forthcoming volume DOING RECENT HISTORY, edited by Claire Potter and Renee Romano.  Alice Echols says that “Potter and Romano demonstrate that tackling recent history poses unique challenges, and they offer absolutely indispensable guidance in meeting them."

The newest book in the series is RUMOR, REPRESSION, AND RACIAL POLITICS, by George Derek Musgrove. In the spirit of Cole’s message to the AHA, it provides historical context for current events – specifically the accusation of ethics violations leveled against prominent black elected officials like Charles Rangel and Maxine Waters.
Posted by ddesjard@ugapress.uga.edu at 1/11/2012 04:30:00 PM

THE RIOTS has just won the Great Lakes Colleges Association (GLCA) New Writers Award for Creative Non-fiction. Now in its forth-third year, the GLCA New Writers Award recognizes newly published writers and introduce the best among them to students and faculty on GLCA campuses. Author Danielle Cadena Deulen will tour the GLCA's thirteen member colleges to read from her work and talk about writing. Here's what the GLCA judges have to say about THE RIOTS:


These (often very short) essays are highly compressed and highly realized, sharply drawn, intense in their urgently lyrical way, exquisitely written. Deulen's dialogues and descriptions, fractured and prismatic throughout, seem to burn rather than ease into memory, so charged is her language, and so deft her capacity for rendering stark, surreal scenes. This is a book written with a care for language—the imagery is often beautiful and surprising, the surprise like tiny explosions now and again within a sentence, a paragraph, on a page. The beauty not a pretty beauty, but sometimes ugly in a tough, edgy way. The organization of the book follows the associative logic of poetry—or of memory. The innovative, non-chronological sequence in which these pieces are placed creates a larger story that feels bigger than the sum of its parts and digs deep into the racial and gendered consciousness of the narrator and the times and places in which her story takes place.

The UGA Press has now won a GLCA New Writers Award in each of its three categories: creative non-fiction, fiction, and poetry. In addition to THE RIOTS, winning UGA Press books include HARDSCRABBLE by Kevin McFadden (poetry) and COMPRESSION SCARS by Kellie Wells (fiction).

THE RIOTS is also a winner of the Association of Writers and Writing Programs Award for Creative Nonfiction.
Posted by ddesjard@ugapress.uga.edu at 1/11/2012 11:38:00 AM

In the News: UGA Press Advisory Council Founder and Chairman

The January 2012 issue of Georgia Trend lists University of Georgia Press Advisory Council founder and chairman, Craig Barrow III, as one of the 100 Most Influential Georgians. According to the Georgia Trend website, the individuals are "selected for the power and influence they wield." Craig Barrow was chosen due to his support of UGA Press and our mission to publish outstanding works of scholarship and literature by scholars and writers throughout the world.
Posted by ddesjard@ugapress.uga.edu at 1/04/2012 10:58:00 AM

Watch the video below to see Melinda Moustakis, author of BEAR DOWN, BEAR NORTH, give a reading and interview at the National Book Foundation's 5 Under 35 event.

PHILLIS WHEATLEY made the 2011 top ten non-fiction list on PhiloBiblos.

Vincent Carretta gave a talk at the Massachusetts Historical Society in November. Here he discusses his book, PHILLIS WHEATLEY.