This week and next, Atlanta joins cities including Boston, Chicago, Washington and Miami in holding events to address "Lincoln's unfinished work of race, justice, and equality of opportunity."

2009 marks the 200th anniversary of Abraham Lincoln's birth, and the Abraham Lincoln Bicentennial Commission, the Georgia Humanities Council, the National Center for Civil and Human Rights and over 20 other Atlanta area organizations, including the University of Georgia Press, will act as co-conveners of the Atlanta events.

A public conversation at the Carter Center on Wednesday, December 9 at 6 pm will feature keynote speaker Dr. Stephen L. Carter, William Nelson Cromwell Professor of Law at Yale University and author of the novel Jericho's Fall. Panelists will include mayor Shirley Franklin and Manisha Sinha, Associate Professor of Afro-American Studies at the University of Massachusetts, Amherst (and a series editor for our Race in the Atlantic World series).

Register here to attend this free town hall event and join other greater Atlanta community members in a discussion of the "unfinished work" yet to do regarding race in our city.
Posted by ddesjard@ugapress.uga.edu at 11/30/2009 04:22:00 PM

LIBERALISM, BLACK POWER AND THE MAKING OF AMERICAN POLITICS, 1965-1980 by Devin Fergus rated essential by Choice Reviews for Academic Libraries: "Fergus has fingertip knowledge of North Carolina during this era and does a masterful job of navigating the often-complex contours of Tar Heel politics. His coverage of Little is outstanding, and his account of Soul City, that abortive attempt at a harmonious biracial community in eastern North Carolina, is marvelous. An outstanding work."

Alexander Macaulay and MARCHING IN STEP, an account of cultural change at The Citadel in recent decades, chronicled in Charleston's Post and Courier: "The tension between being both an insider and a dispassionate historian worked in his favor, Macaulay says."

Ostlund will appear on the variety radio show West Coast Live! on November 28 with ecopragmatist Stewart Brand and other guests.
Posted by ddesjard@ugapress.uga.edu at 11/20/2009 10:45:00 AM

Walden by Haiku on NPR's Living on Earth 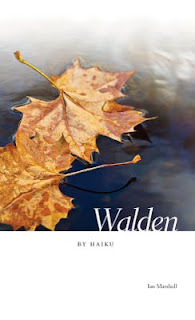 This weekend's edition of the NPR show Living on Earth will include an interview with Ian Marshall in which he discusses his recent book WALDEN BY HAIKU. In this unusual project, Marshall explores what he calls "haiku moments" in Henry David Thoreau's Walden by actually stripping the text down into haiku form. For example:


huckleberries
the bloom rubbed off
in the market cart


Marshall's accompanying text examines the underlying principles shared by Thoreau's very image-driven work and the art of haiku. He argues that this thought experiment helps clarify what makes the best passages in Thoreau so powerful and lays a foundation for a better understanding of the aesthetics of American nature writing.
Posted by ddesjard@ugapress.uga.edu at 11/19/2009 02:15:00 PM

Two pieces on CNN.com this week relating to THE LOST BOYS OF SUDAN: one a profile of Kuol Dut, known in the book as Daniel, and the other a blog post by Mark Bixler about the experience of writing the book.

Amrita Chakrabarti Myers wins the Letitia Woods Brown Book Award for Best Article from the Association of Black Women Historians for her chapter in SOUTH CAROLINA WOMEN, which examines a remarkable family of free black women in antebellum Charleston.

"Spartanburg was not my destination, but I became smitten with the fact that here in the Piedmont was this small town with such an international vibe." Marko Maunula (GUTEN TAG, Y'ALL) draws more than a hundred listeners to the Spartanburg County Public Library this week; comments about the book and the event in the Spartanburg Herald-Journal and the Spartanburg Spark.

Jack E. Davis and AN EVERGLADES PROVIDENCE at the Miami Book Fair International this Saturday; pre-fair write up in the Miami Herald.

American Historical Review on Susan Youngblood Ashmore's CARRY IT ON (reviewed with Thomas Kiffmeyer's Reformers to Radicals):"Ashmore and Kiffmeyer offer a powerful indictment of the operation of the War on Poverty on the ground, contribute to an understanding of public policy issues, and, in Ashmore's case, add to our knowledge of the civil rights movement after its glory years."

THE MANSION OF HAPPINESS reviewed at The Rumpus.

Lori Ostlund (THE BIGNESS OF THE WORLD) interviewed in the Albuquerque Alibi; a video review of the book at The Collagist.
Posted by ddesjard@ugapress.uga.edu at 11/13/2009 12:49:00 PM

At this weekend's annual meeting of the Southern Historical Association in Louisville, Susan Youngblood Ashmore's CARRY IT ON was announced as the winner of two significant southern history prizes.

The Southern Historical Association's Francis B. Simkins Award recognizes the best first book by an author in the field of southern history over a two-year period. 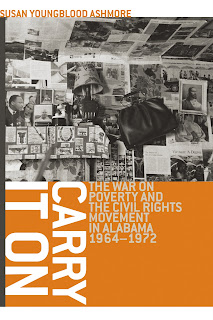 The Southern Association of Women Historians' Willie Lee Rose Prize is awarded annually for the best monograph in southern history authored by a woman. In their award letter, the prize committee commended Ashmore for her impressive and exhaustive research as well as her efforts to "foreground black agency and trace continuities from the civil rights movement to the war on poverty--topics that historians have tended to separate far too much."

The Journal of American History review of the book captured its remarkable qualities this way: "A brief review cannot do justice to Ashmore's skill in weaving together the economic and political aspects of a still-unfinished effort to remake Alabama along more just and egalitarian lines. Her book, like Kent Germany's New Orleans after the Promises (2007), signals a new level of breadth and sophistication in civil rights scholarship."
Posted by ddesjard@ugapress.uga.edu at 11/09/2009 02:32:00 PM

Rob Amberg and THE NEW ROAD in Mountain XPress.

Matthew H. Bernstein (SCREENING A LYNCHING) on CNN.com in conjunction with the airing of the new documentary The People vs. Leo Frank on PBS stations nationwide this week.

The Mobile Historic Development Commission has awarded the Elizabeth B. Gould research award to John S. Sledge for THE PILLARED CITY and issued a commendation to Sheila Hagler for the photography.

This weekend, NPR's Studio 360 will air a segment on Women of Troy, a collaboration between poet Susan B.A. Somers-Willett (QUIVER) and photographer Brenda Ann Kenneally. In poems, photographs, and essays, Somers-Willett and Kenneally document the effects effects of the economic crisis on the lives of working mothers in Troy, New York. (The podcast will shortly be available from Studio 360 online.)

The broadcast is part of In Verse, a project "in the spirit of the Federal Writer's Project" in which poets, photographers, and radio producers interview people living on the economic edge and to document their lives. In Verse is an initiative of Public Radio Makers Quest 2.0 (which is in turn an initiative of the Association of Independents in Radio) in collaboration with the Virginia Quarterly Review.

Congregation, a second project, paired Pulitzer Prize-winning poet Natasha Trethewey and Emmy-nominated photographer Joshua Cogan for a visit to Gulfport, Mississippi in the aftermath of Hurricane Katrina; the radio segment stemming from this collaboration will air on Studio 360 next weekend, November 13-15. Next fall, The University of Georgia Press will publish BEYOND KATRINA: A MEDITATION ON THE MISSISSIPPI GULF COAST, an expanded account of Trethewey's journey.

There are approximately one million ways to explore these projects further, including:
- a discussion with Somers-Willett and Kenneally to follow this weekend's broadcast at transom.org, a Peabody Award-winning website dedicated to channeling innovative work in public radio

- Multimedia slideshows of both projects on Vimeo and You Tube