Short Takes: Some discussion in the debate of what a weed is

Mark Auslander (THE ACCIDENTAL SLAVEHOLDER) interviewed for AJC coverage of this past weekend's Slavery and the University conference at Emory. A video with footage of the closing ceremony and commemorative events is available here. 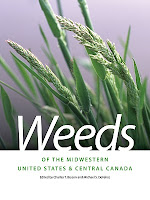 Iowa Farmer Today features WEEDS OF THE MIDWESTERN UNITED STATES AND CENTRAL CANADA, recommending the book and also noting that it has "led to some discussion in the debate of what a weed is."

Sharon White (VANISHED GARDENS) is the winner of the Italo Calvino Prize in Fabulist Fiction from the University of Louisville.

Historian John W. Rozier (THE GRANITE FARM LETTERS) has died at the age of 92. Obituary in the AJC.

The new Journal of Southern History includes reviews of several press titles: GEORGIA WOMEN ("While the essays might hold special interest for those who study Georgia, they can also introduce scholars of women's and southern history to new intricacies in the lives of even the most famous of the women"); SOUTH CAROLINA WOMEN volume 1 ("The real value of this text...lies in its inclusiveness"); CIVIL RIGHTS MEMORIALS AND THE GEOGRAPHY OF MEMORY ("recommended for historians of the South interested in collective memory"); and SAM RICHARD'S CIVIL WAR DIARY ("It is a gem, providing one of the most complete descriptions of civilian life in Atlanta between October 1860 and August 1865")

"Slavery and the University" Conference and a Forthcoming Title

This fall, the University of Georgia Press will be publishing THE ACCIDENTAL SLAVEOWNER: REVISITING A MYTH OF RACE AND FINDING AN AMERICAN FAMILY by Mark Auslander. The book investigates the story of Catherine Boyd, "Miss Kitty," an enslaved woman whose owner was Bishop James Andrew, the first president of Emory University's board of trustees.

A podcast is available here where you can hear Auslander describe his research into Miss Kitty's history and read from the prologue of his book.

This week, Auslander will take part in a conference being held at Emory University to examine the history and legacy of slavery's role in higher education. Slavery and the University will include a keynote Thursday evening by Brown University president Ruth Simmons and a day of commemoration on Sunday in Oxford, GA led by Auslander. The conference is sponsored by Emory's Transforming Community Project, which is supported in part by the Ford Foundation; a full schedule and registration information can be found online here.

Emory celebrates its 175th anniversary this year, and as part of that commemoration, the board of trustees has recently issued a formal statement of regret for the history of the school's involvement with slavery.
Posted by ddesjard@ugapress.uga.edu at 2/01/2011 02:18:00 PM