An article about how UGA Press is planning for tightened state budgets appeared in the Atlanta Journal-Constitution this morning.

WILLIAM FAULKNER AND THE SOUTHERN LANDSCAPE in the Mobile Press-Register

Four UGA titles have strong reviews in the most recent Journal of American History:

THE BIG TENT -- "superb and revelatory"

ENTREPRENEURS IN THE SOUTHERN UPCOUNTRY -- "Well-argued and linked to broad historical issues, it is a model community study that deserves a wide readership."

CLOSER TO TRUTH THAN ANY FACT -- "Refreshingly lucid and cogent . . . . I look forward to periodically rereading 'Closer to the Truth Than Any Fact' and to wrestling with its conclusions."

CARRY IT ON -- "A brief review cannot do justice to Ashmore's skill in weaving together the economic and political aspects of a still-unfinished effort to remake Alabama along more just and egalitarian lines. Her book, like Kent Germany's NEW ORLEANS AFTER THE PROMISES, signals a new level of breadth and sophistication in civil rights scholarship."

The Asheville Citizen-Times recently reviewed WHAT VIRTUE THERE IS IN FIRE.

Ed Pavlic (WINNERS HAVE YET TO BE ANNOUNCED) received the Georgia Author of the Year Award in poetry this month. The book was recently reviewed at Coldfront : “one can only imagine the kind of mad-trip Pavlic must have taken his own self on in order to write this thing.”

Slashfood reviews and recommends CRAIG CLAIBORNE’S SOUTHERN COOKING using pimiento cheese and biscuits as a test case: “There's only one right way to make either of these Southern staples and that's the way your mother, her mother, her mother's mother, ad infinitum did. That said, these'll definitely do in a pinch. For those sans Mississippi ancestry, your new Uncle Craig's renditions of this pepper-kicked cheese spread and deeply savory, lard-rich biscuits is all you'll need. Instructions are thorough, simple and forgiving of variances.”
Posted by ddesjard@ugapress.uga.edu at 6/29/2009 04:49:00 PM 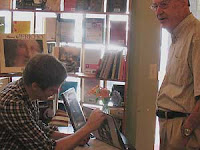 As noted in the Asheville Citizen-Times, author and photographer Reuben Cox launched his new book THE WORK OF JOE WEBB in a number of locations in western North Carolina this weekend, including Asheville, Sylva, and his hometown of Highlands, North Carolina. The book is an artist's exploration of the architectural legacy left by cabin builder Joe Webb, who worked in the early decades of the twentieth century. The photographs, made with a large-format view camera and printed using exposure to the sun and what may be the last commercially manufactured printing out paper in existence, involve technologies that date back to Joe Webb's era. The resulting images offer rich, beautifully textured glimpses of these unusual structures and spaces. 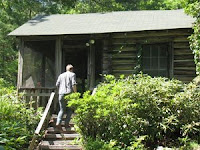 Joe Webb lived and worked in Highlands, and a number of people who attended Thursday’s book event at the newly opened Bascom Center for the Arts or Saturday’s signing at Cyrano’s Bookstore either own or are in some way connected to a Joe Webb cabin. Joe Webb’s grand-niece attended Thursday and told Cox a few new stories about her builder relative. Others remembered living in particular structures when they were young, or related how their families had sold cabins decades ago for modest amounts relative to the high value of the properties today. Cox’s former art teachers, math teachers, and bus drivers also came out to celebrate the publication of the project.
Posted by ddesjard@ugapress.uga.edu at 6/29/2009 01:14:00 PM 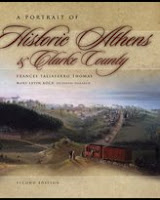 At their annual meeting last week, the Athens-Clarke County Heritage Foundation awarded the new edition of PORTRAIT OF HISTORIC ATHENS AND CLARKE COUNTY their 2009 Outstanding Publications and Programs award, which honors publications in the field of preservation that possess a high degree of graphic design integrity and/or wide use or impact. 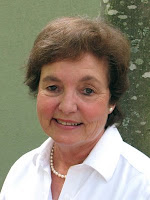 A reception and book signing featuring the author, Frances Taliaferro Thomas, will launch the book on Tuesday, June 30, at the Taylor-Grady House (634 Prince Avenue in Athens). The reception begins at 5:30; presentation and signing will follow at 6:15. The event is free and open to the public, but please RSVP to 706-353-1801 by Wednesday, June 24 if you plan to attend as space is limited.

In PORTRAIT, originally published in 1992, Thomas brings her deep interest, commitment and experience writing about historic preservation to a study of her own town: Athens, Georgia. A founding member of the Athens Historic Preservation Commission, Thomas has created a guide to historic Athens that takes into account people, environment and economics as a framework for understanding the richness and significance of Athens’s built environment. Now in paper, the new edition features color photographs and a new chapter exploring developments in Athens in the last two decades.

Coleman Barks Featured on the NewsHour with Jim Lehrer

The NewsHour with Jim Lehrer recently aired a feature about how the work of the mystic poet Rumi serves as an all-too-rare cultural bridge between people in the United States and Afghanistan. Coleman Barks, a bestselling translator of numerous books of Rumi's poetry, is interviewed and prominently featured in the segment. Barks is also a poet and author of the recently published WINTER SKY: NEW AND SELECTED POEMS 1968-2008. 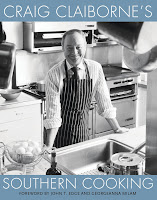 The Southern Foodways Alliance, the state of Mississippi and the New School will celebrate the life and work of Craig Claiborne with two events this week in New York City.

A sold-out discussion and champagne toast on Friday evening (6/12) will include David Kamp of Vanity Fair and food celebrity Jacques Pepin commenting on Claiborne's quarter-century career at the New York Times and his role in America's changing approach to food. Lauded Mississippi chefs will serve "Tastes of Claiborne's Mississippi."

There may still be time to squeeze in to a Thursday evening (6/11) panel on "Craig Claiborne and the Invention of Food Journalism" sponsored by the Food Studies Program at The News School. The panel will feature, among others, food writers Betty Fussell and Molly O'Neill; call 212-229-5488 or e-mail boxoffice@newschool.edu for tickets.

The University of Georgia Press brought the celebrated CRAIG CLAIBORNE'S SOUTHERN COOKING back into print in 2007.
Posted by ddesjard@ugapress.uga.edu at 6/09/2009 02:31:00 PM

An interview with Mary Odem on LATINO IMMIGRANTS AND THE TRANSFORMATION OF THE U.S. SOUTH aired May 17 on Georgia Public Broadcasting’s Georgia Weekly television show; video is available.

Wisconsin Public Radio's University of the Air aired an hour-long interview with James Lorence (THE UNEMPLOYED PEOPLE’S MOVEMENT) aired May 17: “Few of us would single out Georgia as a hotbed of labor unrest, but during the Depression it was.”

Listen to a podcast featuring Macalester professor of anthropology Dianna Shandy on the forthcoming title GLASS CEILINGS AND 100-HOUR COUPLES.

Andrew Porter’s THE THEORY OF LIGHT AND MATTER was named ForeWord’s Book of the Year for 2008 in the category of Short Fiction. The book was also shortlisted for the Paterson Prize for a first book and longlisted for the Frank O’Connor International Short Story Award.

Victoria Chang’s SALVINIA MOLESTA is a finalist for the California Book Award in poetry, with the winner to be announced tonight; an interview with Chang appeared recently in New Letters and is reprinted on Poetry Daily.

The Southwest Journal of Cultures reviews HERE, GEORGE WASHINGTON WAS BORN: “Bruggeman’s account of Washington’s birthplace provides an engaging tour through our longstanding, perhaps innate, fixation on relics and pilgrimage sites as well as the complicated process of remembering the past.”

Southern Quarterly reviews GROUNDED GLOBALISM, noting that “What is most compelling about Peacock’s thesis is that his new paradigm depicts an altered sense of self for the southerner” and praising his “varied approach” and “the balance he achieves among different perspectives.” In the same issue, DIXIE EMPORIUM is praised as an “excellent collection,” with particular attention to contributions from Huber, Ketchell, Giggie and Eskew.
Posted by ddesjard@ugapress.uga.edu at 6/04/2009 05:00:00 PM