Congratulations to Lia Purpura, author of INCREASE. Her newest book, On Looking, is a finalist for the National Book Critics Circle Award for Criticism. NBCC board member Kevin Prufer blogs about Purpura and her book at Critical Mass. Feels like a good time to mention our own books that have been NBCC winners (HEAVEN AND EARTH) or finalists (LEAVING SATURN and A POETRY OF TWO MINDS).

SOUTHERN COOKING by Mrs. S. R. Dull has been nominated for a Southern Independent Booksellers Alliance award in the Cooking category.

Follow-up to our January 23, 2007, posting on the latest criminal conviction to be overturned by DNA evidence: Greg Hampikian, who collaborated with Calvin Johnson, Jr. on EXIT TO FREEDOM, tells us that,

"last summer, while I was teaching the Georgia Innocence Project interns about DNA, I met with student intern Cliff Williams (no relation to the now-free Willie O. "Pete" Williams) who was working on this case. He told me that the case report mentioned a slide taken from the victim 22 years ago. Cliff wondered if they might have DNA from the true rapist on the slide. When I looked at the analyst's case notes and the micrographs, it was clear that the slide contained many sperm cells, most likely from the perpetrator. The case was similar in a lot of ways to Calvin Johnson's. 'Go find that slide, and you'll get the truth,' I told him."

Hampikian, who is director of the Idaho Innocence Project, also holds positions in both the biology and criminal justice administration departments at Boise State.

Just added to the Georgia in the 20th Century statewide lecture series: six new presentations on such topics as immigration, quilting, and black nationalism. See these dates on our web listing to find out more about the new lectures: February 15, 22, and 26 and March 13 and 29.

TESTING THE LIMITS by Brian Lewis Crispell is a major source for this story about the death of George Armistead Smathers, the former U.S. senator from Florida.

Over in Atlanta: The Duck & Herring Co. Radio Hour has recorded their January 27, 2007, live event at Little Shop of Stories for later podcasting. Featured writers include Atlantans Hollis Gillespie and Jack Pendarvis, as well as novelist Chuck Rosenthal.

We've learned about a podcast interview with Mark Bixler, author of THE LOST BOYS OF SUDAN, on the Chattahoochee Review's web site. You'll also find more than a dozen other readings, interviews, and lectures by such figures as Jill McCorkle, Luis Alberto Urrea, and Hampton Sides.

The January 19, 2007, broadcast of Georgia Public Radio's Georgia Gazette featured an interview with Perry Dilbeck, author of THE LAST HARVEST. You can still listen to it online.

Recent reviews:
Publishers Weekly on ULTRA-TALK
H-Net on BEYOND ATLANTA

We get blogged:
Recommendation of JOURNEY TOWARD JUSTICE in ACRLog
Citation of J. Baird Callicott, coeditor of THE GREAT NEW WILDERNESS DEBATE and Paul Shepherd, author of NATURE AND MADNESS and other titles, in The Wilding Institute
Posted by ddesjard@ugapress.uga.edu at 1/29/2007 02:30:00 PM

That was one of the reactions Michael Shumaker had to the news of Willie O. "Pete" Williams's impending release from prison after more than twenty-one years. Shumaker was Williams's defense attorney during his 1985 trial for rape. Conclusive DNA evidence has just cleared Williams of his conviction. Williams has yet to make a public statement, but Shumaker was also heard to say "Thank God for the Innocence Project."

The Williams case brings to mind Calvin C. Johnson Jr.'s story, which is told in EXIT TO FREEDOM. Johnson, who now sits on the board of directors of the Georgia Innocence Project, spent sixteen years behind bars for rape and related charges before he was freed in 1999--also on the basis of DNA evidence. Just as it almost happened to Williams, the physical evidence gathered in the investigation of Johnson's alleged crime came perilously close, a number of times, to being lost or discarded.

Among other books that take a hard look at our justice system, the use and abuse of evidence, and the promise of DNA testing, The Innocents is one of the most affecting--perhaps because it shows the faces of the wrongfully accused alongside their stories.

THE LOST BOYS OF SUDAN, a moving true story of four Africa

n war refugees who relocated to the United States, is the most heavily browsed title on our web site. Appearing around the same time as the memoir They Poured Fire on Us from the Sky, THE LOST BOYS has recently been joined by such other works on the Sudanese crisis as Dave Eggers's novel What is the What and the soon-to-open film God Grew Tired of Us. 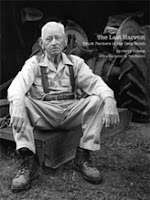 Long overdue thanks to Blue Earth Alliance for supporting the work of photographers like Perry Dilbeck, whose documentary project on truck farmers led to the book THE LAST HARVEST. Thanks also to Jim Auchmutey at the Atlanta Journal-Constitution for his thoughtful piece on THE LAST HARVEST.
Follow-up to our August 11, 2006, posting on the "Georgia in the 20th Century" lecture series: The schedule has been set. Join a stellar lineup of southern historians and cultural observers throughout February and March in Plains, Macon, Madison, Savannah, Atlanta, Decatur, and Augusta.

Two follow-ups to our December 20, 2006, posting on the latest Flannery O'Connor Award winners:

First, Anne Panning, author of the forthcoming Super America is spending a semester in Vietnam. Keep up with the family's adventures at Mark and Anne in Vietnam.

Second, here's a new and improved bio for Peter LaSalle, author of the forthcoming Tell Borges If You See Him. Nothing factually wrong, by the way, with the bio posted on December 20 (should anyone reading this have quoted it). What follows, however, is just a bit more revealing:

Peter LaSalle grew up in Rhode Island, graduated from Harvard, and has taught at universities in this country and in France, He is the author of two previous story collections, The Graves of Famous Writers and Hockey Sur Glace, and a novel, Strange Sunlight. He has contributed fiction to many magazines and anthologies, including Paris Review, Southern Review, Tin House, Best American Short Stories, Best of the West, Sports Best Short Stories, and Prize Stories: The O. Henry Awards. He is also active as an essay writer and book critic, having contributed to The Nation, The Progressive, Commonweal, Raritan, AGNI, The Los Angeles Times Book Review, and The New York Times Book Review. In 2005 he received the Award for Distinguished Prose from the Antioch Review. For a dozen years he was a regular visiting faculty member at the Harvard University Summer School, and he is currently Susan Taylor McDaniel Regents Professor in Creative Writing at the University of Texas at Austin.

If you liked G. Ward Hubbs's GUARDING GREENSBORO, take a look at A Separate Civil War. Thanks to Kevin M. Levin for this tip, which he posted on Civil War Memory, a blog "about subjects related to how Americans have chosen to remember and commemorate their Civil War."

We get blogged:
Review of AN ISLAND IN THE LAKE OF FIRE in Debtor to Grace
Recommendation of DOWN TO THE WATERLINE in My Florida History
Poetry reading announcement for DRAWING OF A SWAN BEFORE MEMORY author Laynie Brown in Artifact
Recommendation of VENEZUELA AND THE UNITED STATES in Gringo in Venezuela