The University of Georgia Press is pleased to announce Crux: The Georgia Series in Literary Nonfiction. Edited by John Griswold, the series aims to publish two to four new titles annually.

Named for intersections, and for the heart of the matter, this series will publish literary nonfiction by diverse writers working in a variety of modes, including personal and lyric essay, memoir, cultural meditation, and literary journalism. Books are intended for general readers, including writers, teachers of writing, and students, and will be both intelligent and accessible. Engagement with the world, dedication to craft, precision, and playfulness with form and language are valued. As the series develops, it will include non-American writers and experiences.

Griswold is an assistant professor in the MFA program at McNeese State University, Lake Charles, Louisiana. He is the author of A Democracy of Ghosts; Herrin: The Brief History of an Infamous American City; and Pirates You Don’t Know, and Other Adventures in the Examined Life: Collected Essays (Georgia, 2014). He has written extensively (as Oronte Churm) at Inside Higher Ed and McSweeney’s Internet Tendency.

“I’m gratified to be part of this new publishing opportunity,” Griswold says. “The series will build on UGA Press’s success and reputation publishing the Association of Writers & Writing Programs (AWP) Creative Nonfiction contest winners since 1986, as well as nonfiction anthologies and craft books. Georgia combines the intellectual reputation of a major university press with savvy promotion in the digital age, and we intend to reach smart readers who like to be entertained, in the widest sense.”

The inaugural book in the series will be published in October 2015. My Unsentimental Education, a memoir by Debra Monroe (On the Outskirts of Normal), offers a smart and lyrical take on the isolation that occurs when crossing class barriers in pursuit of the life of the mind.

Press director Lisa Bayer adds, “Creative nonfiction as a genre is experiencing an unprecedented period of growth and interest—a bit of a golden age. Georgia’s strong literary legacy, combined with the richness of the field, positions us perfectly to make a visible mark.”

For more information:
- contact John Griswold at crux.series@gmail.com
- visit the Crux series page at the University of Georgia Press
- download a jpeg of the logo
- online submissions manager and submission guidelines available here
Posted by UGA Press at 3/30/2015 11:06:00 AM

Goal: To introduce interested graduate students at the University of Georgia's Grady College of Journalism and Mass Communication to the world of book publishing through the Press's marketing department.

Timeframe: We are looking for a commitment of at least two semesters.

Qualifications: We are seeking an individual with excellent organizational skills who is detail oriented and has the ability to work independently. Applicants must have good communication skills. A good working knowledge of graphic design and social media is a plus.

Application materials should be submitted to Debbie Marable Sickles in the Grady Collge Graduate Studies Office by no later than April 22 for consideration for an assistantship starting Fall 2015. Application materials should include a resume and letter of interest. Selected candidates will be interviewed by the publicity and sales manager at the Press. For more information about the Press or the assistantship, contact Amanda E. Sharp or visit our website at www.ugapress.org.

The Georgia Power-Grady College assistantship recipient will work directly with Amanda E. Sharp, publicity and sales manager. The student will work on one or multiple books’ promotions, from the beginning stages of publicity to the end, allowing them to see the results of their work and to understand the challenges of winning media coverage. They will help plan the publicity campaign, research niche media, set up and support events, and handle other marketing duties as necessary.  They will also be responsible for soliciting and publicizing pre-publication endorsements for all trade and select scholarly titles.

Student receives tuition waiver but still has to pay student fees. UGA Press will pay student by the hour.

Booklist reviews ALONE ATOP THE HILL, Alice Dunnigan's "indelible self-portrait." The book "gives deserved recognition to a principled and hardworking reporter whose array of singular accomplishments makes her worthy of further scholarship and public attention," according to Foreword Review. The Root reviews ALONE ATOP THE HILL with two other recent books (Eye on the Struggle and The Presidency in Black and White) on black female journalists:


[T]hese books provide a fascinating timeline of history to enlighten a generation that takes it for granted that a black woman can be the most powerful media personality in the United States or a confidante to a sitting president and first lady. [Alice] Dunnigan and [Ethel] Payne, the Jim Crow pioneers, could best be described as crosses between, say, the political reporter Nia-Malika Henderson and the advocate-broadcaster Tavis Smiley.

Nieman Reports has an excerpt from ALONE ATOP THE HILL. Check it out, along with Simeon Booker's comments, here.

Advance review of the forthcoming book, LENS OF WAR, from Booklist:


This collection of images, many of them familiar to Civil War enthusiasts,were selected to serve as a jumping-off point for the essays of 27 scholars on topics suggested by the photos. The photos, topics, and essays are an eclectic mix. By themselves, many of the photos would seem unremarkable, but the often brilliantly written essays compel the reader to view the photos with a fresh perspective. . . . Together, the photos and essays make a superb addition to Civil War collections.

Check out the Way of Improvement Leads Home blog interview with Brian Craig Miller about his new book, EMPTY SLEEVES. Here's a sample:


JF: In two sentences, what is the argument of Empty Sleeves?

BM: The challenges amputees posed to southern society were not merely visual and symbolic: injured veterans depended on surgeons to make a proper medical recommendation; on women to provide continued medical care, emotional support, and often basic functioning; on employers to cheerfully accept diminished capacity without seeming to stoop to charity or pity; and on the state to provide prosthetics, validation, and, ultimately, a pension. The process by which this new level of white male dependency--on other men, on women, on employers, and on the state--became societally and culturally accepted (however ambivalently) and was, I argue, a critical facet in the remaking of white manhood in the postbellum South.

The Ms. Magazine blog interviews Barbara McCaskill, author of LOVE, LIBERATION, AND ESCAPING SLAVERY, about her forthcoming book, which focuses on William and Ellen Craft.

Want to see the music playlist Monica McFawn would use for her short story collection, BRIGHT SHARDS OF SOMEPLACE ELSE? Check out it out at Largehearted Boy. Ploughshares praises  McFawn's book: "After reading this collection, you will be thankful that somebody so talented has been able to communicate such hidden, intrinsic details so clearly."

Want to read Sarah Gorham's STUDY IN PERFECT but haven't gotten a copy yet? Check out the excerpt up on Utne.com.

Congratulations, Jeffrey B. Leak! His book, VISIBLE MAN, is the winner of the 2015 Nonfiction Book award from the Literary Awards Committee of the Black Caucus of the American Library Association. The awards ceremony will take place on June 28 in San Francisco.

Congratulations, John Lane! His book, MY PADDLE TO THE SEA, has won the fourth annual Allan D. Charles Award for nonfiction given by the University of South Carolina-Union. The prize will be given at the Upcountry Literary Festival on March 21.

Congratulations to our editorial, design and production departments! Three of our titles were selected for the 2015 AAUP Book, Jacket, and Journal Show in the trade typographic category:

The University of Georgia Press will exhibit the Association of American University Presses 2014 Book, Jacket, and Journal Show April 8-10 from 10 a.m.-4 p.m. in the press’s offices on the third floor of UGA’s main library.

Each year, a panel selects the best books from a variety of categories, including scholarly typographic, scholarly illustrated, trade typographic, trade illustrated, and jackets and covers. This year, the committee received 263 books, 330 jacket and cover design entries, and four journals from which to judge. The four jurors, composed of designing professionals and AAUP members, selected 39 books, 22 jackets and covers and one journal as the best examples of university press design. At the UGA show, visitors can vote for their favorite designs and the chance to win a book from the press.

“I wasn’t sure what to expect when I was invited to judge the AAUP book design competition,” said jackets and covers co-juror Emmet Byrne, design director at the Walker Art Center. “But once I was knee-deep in the stack of ‘real’ scholarly publishing, I found myself enthralled with work that expertly straddled the line between pragmatic and seductive, beautiful object made more beautiful by the fact that they were intended to be dog-eared, highlighted, photocopied and scribbled on. The books that we’ve selected for this competition aren’t books that are merely good looking, but books that want to be read.”

UGA Press received recognition in the scholarly typographic category for The Larder: Food Studies Methods from the American South and Red, White and Black Make Blue: Indigo in the Fabric of Colonial South Carolina Life. Thieves I’ve Known was selected for the trade typographic category.

“Did we understand what the book was about? Did the cover have the right mood? Was it well-executed? Was it aesthetically pleasing? And as always with university press designs, was the concept there? There are many things to keep in mind while looking at university press designs, such as less-than-perfect imagery provided, production constraints and heavy subject matter, but overriding all of these things is the fact that good design is good design,” said jackets and covers co-juror Kathleen Lynch of Black Kat Design. “I feel good about our choices: our winners stood out to us for their clear messages, well-thought-out designs, and beautiful executions.”

Individuals or large groups who are unable to come during the show times can contact Kaelin Broaddus, kaelinb (at) uga.edu, to schedule an appointment for times during the week of April 6.
Posted by UGA Press at 3/11/2015 04:00:00 PM

Carol McCabe Booker, editor of Alice Dunnigan’s autobiography, Alone Atop the Hill, and James McGrath Morris, author of Eye on the Struggle, a biography of Ethel Payne, spoke about these two legendary African-American journalists and their impact and legacy on C-SPAN's BookTV over the weekend. 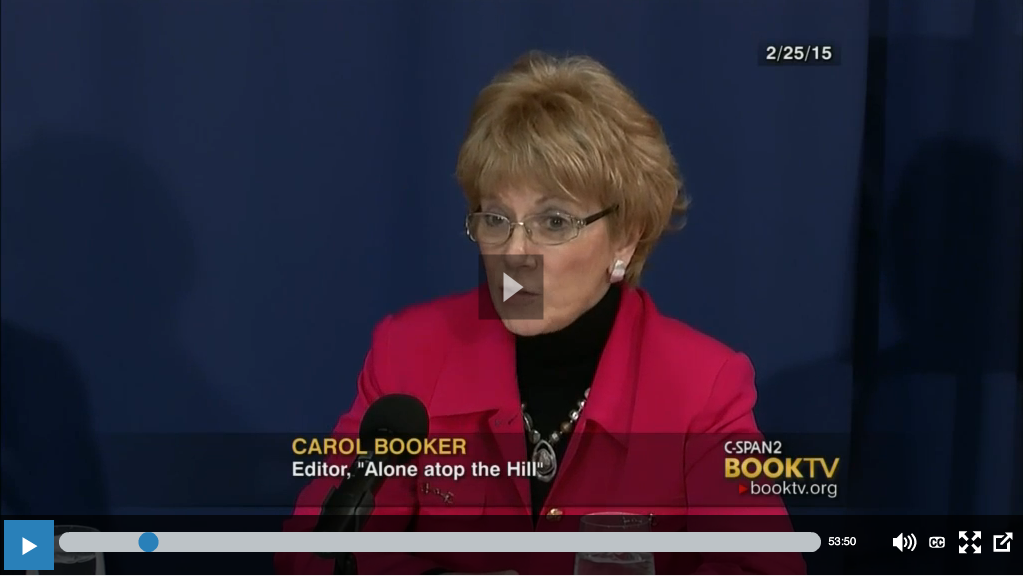