Our just released reader of DC writers and writing, LITERARY CAPITAL, is featured on the cover of this week's Washington City Paper. The editor Christopher Sten and contributor E. Ethelbert Miller will launch the book at Politics & Prose this Saturday at 6 pm.

UPHEAVAL IN CHARLESTON in the Charleston City Paper and in the Post and Courier.

The Washington Independent Review of Books covers Kari Winter's biography of an unrepentant slave trader, THE AMERICAN DREAMS OF JOHN B. PRENTIS.

ON SLAVERY'S BORDER by Diane Mutti Burke reviewed on H-NET: "Her work is by far the most thorough treatment of slavery in Missouri to date, and the exceptional nuance and detail she brings to her analysis of the master-slave relationship will make it one of the most informative of a short list of works on slavery on small farms and in border states."

The June Journal of American History includes reviews of CHARLOTTE, NC ("recommended for all urban geographers, economists, and historians interested in the modern South. It would also be useful reading for southern politicians still struggling tho make up their minds about the meaning and cultural cost of embracing modernity"), JURY DISCRIMINATION ("Waldrep tells how two lawyers cooperated in 1906 to achieve, if only for a brief time, the racial integration of juries in Mississippi. This story is told in accessible prose that will appeal to general readers"), and SUFFERING CHILDHOOD ("Duane's work offers a valuable road map for scholars seeking routes out of the theoretical blind allies that potentially stifle inquiry into the history of children.")

Upcoming area events
Saturday, July 16
B*ATL: a day of events commemorating the Battle of Atlanta
Barry Brown, co-author of CROSSROADS OF CONFLICT, will give a talk and sign books at Bound to Be Read bookstore in East Atlanta Village as part of this day long festival of re-enactments, storytelling and more.
Posted by ddesjard@ugapress.uga.edu at 7/14/2011 03:25:00 PM 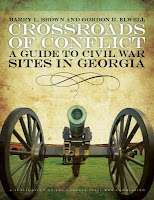