Fiction writers, put your pens away, click "save" on the story you've been trying furiously to finish, and close out of your word processing app. The time for writing, editing, and spell checking is over. Take a deep breath, know you've done your best, exhale, and click "submit."

That's right, today at 5:00 pm is the deadline for spring submissions to the Flannery O'Connor Award for Short Fiction. Winners will be announced later this summer.

If you have not already begun the submission process go over to the Flannery O'Connor Award series page on our web site for the full list of submission guidelines. Good luck!

It's almost summer time again, which means it's time to get involved with some classic American pastimes like fishing and baseball. We at the UGA Press are happy to help you get into the season with some quality literature and some of the latest news.

One classic way to get into summer is to find a good spot for fishing, whether professional or not. Anglers in the Offshore World Championship last month started early as they set a new record for most billfish catches in 2014 with 2,314. If you are interested in learning more about billfish, we suggest picking up a copy of THE BILLFISH STORY.

In THE BILLFISH STORY, Stan Ulanski tells the saga of this unique group of fish and those who have formed bonds with them—relationships forged by anglers, biologists, charter-boat captains, and conservationists through their pursuit, study, and protection of these species. More than simply reciting important discoveries, Stan Ulanski argues passionately that billfish occupy a position of unique importance in our culture as a nexus linking natural and human history. Ulanski, both a scientist and an angler, brings a rich background to the subject in a multifaceted approach that will enrich not only readers’ appreciation of billfish but the whole of the natural world.


Do you have any Atlanta Braves players on your fantasy baseball team? While the Braves have had a slow start this season, they are now leading the National League-East after a three-game sweep of the Chicago Cubs this past Sunday. The Braves may be the best known baseball team in Georgia, but it certainly is not the first.

Tim Darnell tells of the early years of Georgia baseball in his book THE CRACKERS: THE EARLY DAYS OF ATLANTA BASEBALL. Beginning in an era before traffic jams, air-conditioning, and Atlanta’s ascension to international fame, Tim Darnell chronicles the emergence of amateur and minor-league baseball in various forms in Atlanta from just after the Civil War through the rise of the Crackers (1901–65). Through never-before-published player interviews, rare illustrations, extensive appendices of charts and statistics, a Cracker Trivia Quiz, and thorough research, Darnell examines the drama and politics that affected the Crackers over the years. Also profiled is the Black Crackers, Atlanta’s Negro Southern League franchise whose success and popularity paralleled those of their white counterparts. The Crackers is a light-hearted, fun, and engrossing history of a time, a people, and one very special centerfield magnolia tree whose stories are legend to this day.
Posted by UGA Press at 5/12/2014 10:34:00 AM

Email ThisBlogThis!Share to TwitterShare to FacebookShare to Pinterest
Labels: In the News, Sports 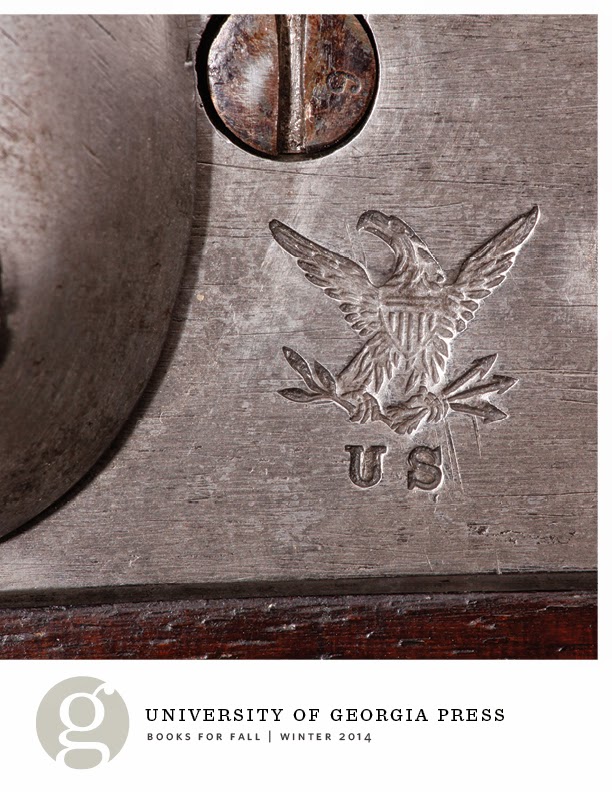 The fall 2014 seasonal catalog is now available on our website. It features titles that will be published from September 2014 through January 2014. We have an exciting range of new books in the categories of history, African American studies, international relations, literary & cultural studies, environmental studies, women’s studies, art & architecture, biography & memoir, and creative writing.

• The newest additions to the Flannery O’Connor Award for Short Fiction series are Karin Lin-Greenberg’s FAULTY PREDICTIONS and Monica McFawn’s BRIGHT SHARDS OF SOMEPLACE ELSE. Lin-Greenberg’s funny yet empathetic stories have characters dealing with fractured bonds and the struggle to connect, while McFawn’s traces the combustive, hilarious, and profound effects that occur when people misread the minds of others.

• Kevin Young selected Jeffrey Schultz’s WHAT RIDICULOUS THINGS WE COULD ASK OF EACH OTHER as one of the winners of the 2013 National Poetry Series competition. Tracy K. Smith selected F. Douglas Brown’s ZERO TO THREE as the winner of the 2013 Cave Canem prize, which is awarded to exceptional manuscripts by African American poets.

• Recounting the past 150 years of the Penn Center, Orville Vernon Burton and Wilbur Cross's PENN CENTER is the first comprehensive study of the Penn School which was established on St. Helena Island, South Carolina in 1862 to provide a formal education for former slaves. In later years, the school expanded to become Penn Normal, Agricultural and Industrial School and later a safe meething place for MLK Jr.'s Southern Christian Leadership Conference, as well as the Peace Corps. Today, Penn Center serves as a social services hub and museum.

• Published in partnership with the Atlanta History Center, Gordon L. Jones’ CONFEDERATE ODYSSEY is the richly-illustrated story of the Confederate war effort as told through one of the world’s finest collection of Civil War artifacts. Atlanta resident George W. Wray, Jr. (1936-2004) built a collection of more than six hundred of the rarest Confederate artifacts ranging from firearms and swords to flags, uniforms, and accoutrements.

• Winner of the AWP Creative Nonfiction Award, Sarah Gorham’s STUDY IN PERFECT is a collection of essays that explores perfection and imperfection.

• Uncovering the story of the Tyrannicide affair, Emily Blanck’s TYRANNICIDE examines how African Americans sought freedom and how white Americans in South Carolina and Massachusetts responded to this quest for freedom by writing diverging slave law between 1765 and 1789. The law they wrote began to solidify the division of America between free and slave states and would later be etched into the Constitution.

To commemorate its long and progressive history of scholarly publishing since 1938, the University of Georgia Press today announces a newly cohesive visual identity. At the center of this rebranding is a new logo designed by art director and designer Erin Kirk New, senior designer Kaelin Chappell Broaddus and marketing designer Jackie Baxter Roberts.

The logo is a balance between timeless and modern. “Our goal was to create a visual identity that links the past with the future,” said New. “The new logo is a circular mark incorporating a lower-case G based on a nineteenth-century slab serif typeface. The interplay of the G with edges of the circle creates negative space that conveys the idea of accessible scholarship with regional as well as global reach.”

The new identity will be consistent across multiple platforms, including print and digital, but also adaptable. “The simplicity of the marks allows it to be easily identified regardless of the size,” said Roberts. “It works well for a variety of formats, whether it is a small icon on your smartphone screen or on the spine of a book or is a large focal point on an exhibit banner.”

“Every successful organization needs a strong visual identity, and ours now matches the integrity and timelessness of the books we publish,” said Lisa Bayer, director of UGA Press. “To my eye our new mark represents the impact of the University of Georgia Press—in publishing the highest quality scholarly content for teaching and research—on the world.” 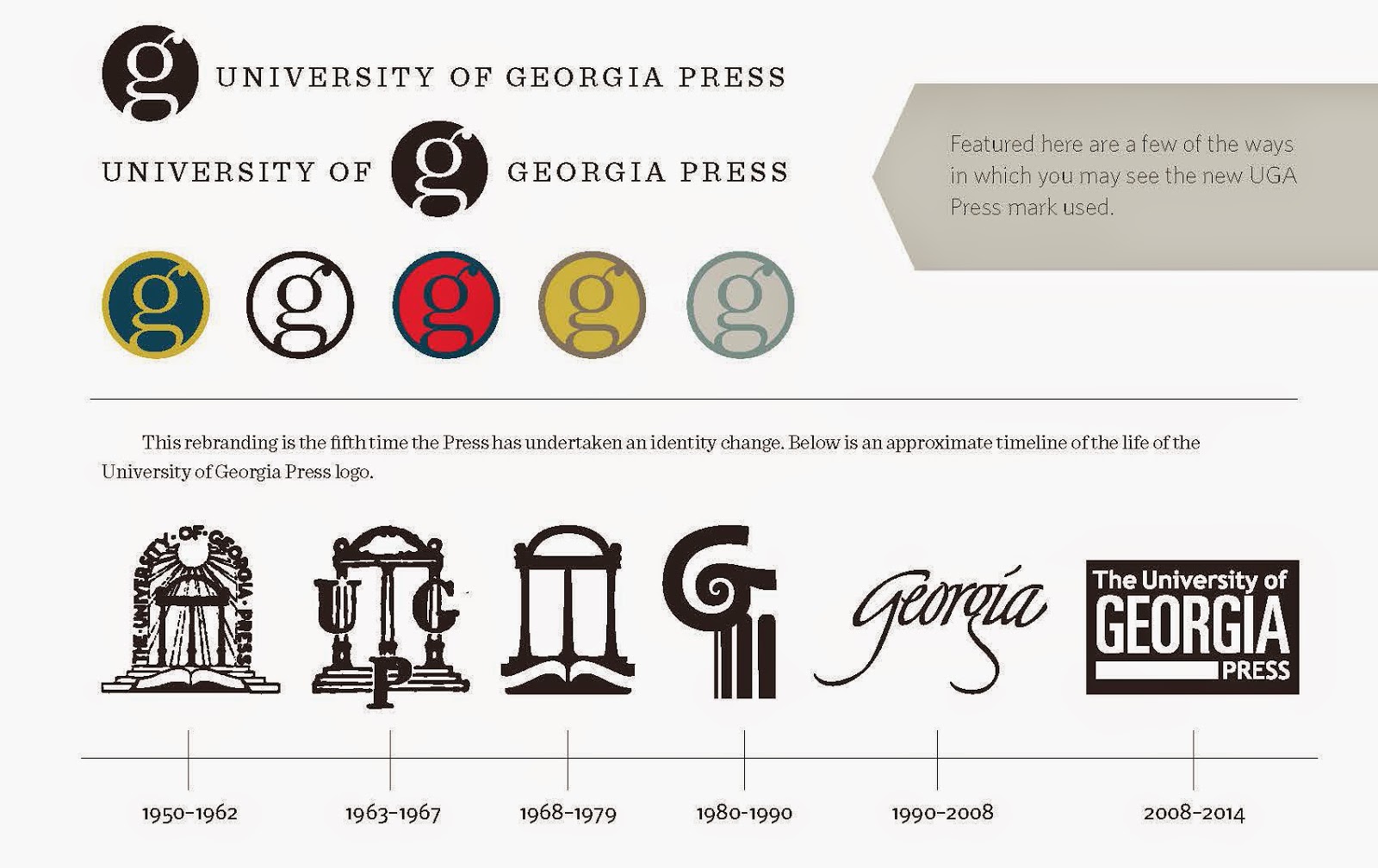