The new Journal of American Studies features an 19-page Round Table discussing THE HORRIBLE GIFT OF FREEDOM by Marcus Wood, calling it "a haunting tour de force." Kirk Savage reviewed the book for the Journal of Interdisciplinary History, and the review in the Journal of American History noted: "The book succeeds powerfully, where others have not, in revealing and explaining the enduring influence of nineteenth-century emancipation iconography in British and American popular culture."

Other reviews in the new JAH include AFRICAN AMERICAN LIFE IN THE GEORGIA LOWCOUNTRY ("Greatly deepens our understanding of the life and culture of lowcountry blacks and is essential reading for all interested in the African experience in early America. "), RABBLE ROUSERS ("Webb's meticulously researched study reveals much about the nature of the larger massive resistance campaign and, more important, highlights the forces that kept the white South from presenting a united front in the face of mounting pressure for racial reform.") and REAL PHONIES ("A vital contribution to historicizing the cultural investment in authenticity.") 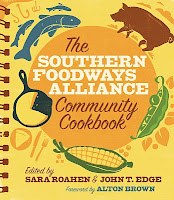 The SOUTHERN FOODWAYS ALLIANCE COMMUNITY COOKBOOK has been named a finalist for the International Association of Culinary Professionals (IACP) Cookbook Award in the Compilations category. Winners will be announced at the organization's annual conference in June. Eater.com reported: "a surprisingly competitive Compilations section, with Amanda Hesser's The Essential New York Times Cookbook up against Sara Roahen and John T. Edge's The Southern Foodways Alliance Community Cookbook." News of the finalist selections was posted widely, including in the New Orleans Times-Picayune, Boston Globe, Minneapolis Star-Tribune, and Los Angeles Magazine. The book also won the 2011 Gourmand World Cookbook Award for community cookbooks.

ALABAMA GETAWAY reviewed in the AJC and on Southern Political Report; Tullos will be at the Virginia Festival of the Book this weekend and at the Center for Documentary Studies at Duke this Monday. See below for details on upcoming Atlanta events.

The Brooklyn Rail ran an excerpt from BLOOMBERG'S NEW YORK.

QUIVER by Susan B.A. Somers-Willett received the Writer's League of Texas Book Award for poetry, which includes a cash prize of $1000.

Short Takes: Who was the best Stooge?

ForeWord Reviews on the just-released ALABAMA GETAWAY by Allen Tullos: "a compelling view of Alabama’s challenges, and possibly a blueprint for meeting them. Informed readers of politics and Southern culture will be engrossed, and some likely infuriated."

C-SPAN's BookTV speaks with William S. Bush (WHO GETS A CHILDHOOD) about the failure of the American juvenile justice system.

CHOICE Reviews for Academic Libraries ranked FROM MUD TO JUG as essential ("The book is visually stunning, with color photographs of pieces that jump off the page. Newly found historical photographs are wonderful additions") and recommended both SALAMANDERS OF THE SOUTHEAST and RABBLE ROUSERS.

Missiology on BEGGING AS A PATH TO PROGRESS: "Having lived in the world-class cities of Lima, Peru and Guayaquil, Ecuador, and being accosted by street urchins in other urban centers in Latin America, Swanson's book was an education for me. It altered my view of the ubiquitous begging child in those teeming metropolises."

"Is Hawkins's the best early biography of Johnson published in 1784-1800? It depends. Who was the best Marx Brother? The best Stooge (of The Three)? The best James Bond on film?" While holding out that Hawkins is a bit "grim and prim and irritable" for his taste, James J. Caudle argues in The New Rambler that "the careful work done by O M Brack in restoring Hawkins's Life to its complete and unabridged form may not appeal to the High Street or Main Street reader. (Their loss.) Brack's new edition will, however, for the foreseeable future form an important part of the scholarly arsenal of standard reference works of Johnson studies, especially concerning those details of Johnson's earlier life which Hawkins knew best."
Posted by ddesjard@ugapress.uga.edu at 3/03/2011 10:41:00 AM