JRT: What prompted you to write poetry about the atomic bomb?
Lowen: Initially, I thought I would be writing about my own family history. I knew from a very young age that my grandfather was involved with the Manhattan Project that created the atomic bomb–he was a nuclear physicist on the Project in the earlier phases, and I remember feeling terrible that my own family was part of something so horrific. As I started to uncover my grandfather’s history, I was looking for ways to write about it, ways to find out about the bomb, and the human feelings attached that led to the creation of this book.
My family history is what led me to write the material, but J. Robert Oppenheimer was the figure that I wanted to be the central force because he’s so emblematic. He became a metaphor for something much larger than he was, and I thought it would be a good way to enter the material. From there, I did extensive research into his life, and I got into the psychology of the bomb, using the splitting in fission as a way to talk about our own departures from our conscience.

Kirkus Reviews describes THE SMALL HEART OF THINGS as a "sharply observed" and "deeply felt book."

KATHARINE AND R. J. REYNOLDS is both a "tour de force" and "top-notch study," according to the Journal of American History. 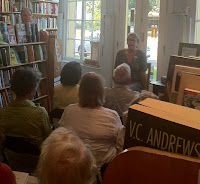 ISLAND TIME author Jingle Davis had a talk and book signing at Avid Bookshop in Athens, GA this past Saturday. Athens Patch recommended the event to its readers, saying "If you love St. Simon’s, the beach, or just good writing, be there." Thanks to everyone who came and to Avid for hosting it!

"[Novey's] modes vary from flashes of anecdote to surreal narrative, from prose to brief lyrics to long-lined poems. The effect is one of an extended reach toward concretions, routines and environments that won't yield to mere wishes to understand or change them. . . . In Exit, Civilian, the thing is the prison, intractably present—and freedom, more than simply a life outside a jail, comprises an infinite speculation on the meaning of itself. The tonal gives way to the atonal, the fuzzy."—Ron Slate's review of EXIT, CIVILIAN on his website, On the Seawall.

WFPL 89.3 talks with Frank X Walker about his new book, TURN ME LOOSE. Listen to the interview here:

CHICKEN DREAMING CORN author Roy Hoffman has a piece in the New York Times in which he comments on the experiences from his youth. In particular, he reminisces on hitchhiking in the 1970s.

A few weeks ago, the Brooklyn Museum of Art hosted an event for author Jane Gerhard and artist Judy Chicago to promote the new book, THE DINNER PARTY. Below is a YouTube video from Judy Chicago that features audio of the conversation between Chicago and Gerhard, moderated by Saisha Grayson, Assistant Curator. 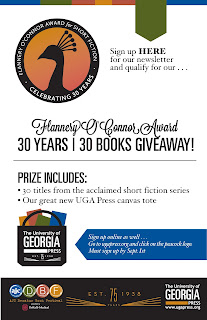 Sign up for our newsletter and qualify for our Flannery O’Connor Award 30 Years | 30 Books Giveaway! Stop by our booth at the Decatur Book Festival to enter in person or sign up online by noon EDT September 1st—winners will be announced later that day. You need not be present to win.