Measured Perspectives on Latino Immigration in the South

The Southern Poverty Law Center has just released the report "Under Siege: Life for Low-Income Latinos in the South." The study finds that Latino immigrants--both legal and illegal--are routinely targets of wage theft and racial profiling and cites anti-immigration sentiment as a driving force behind these and other abuses. The debate over immigration, especially illegal immigration over our southern border--has grown increasingly heated and confrontational in recent years. 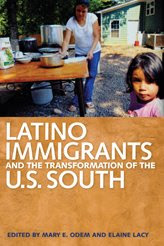 LATINO IMMIGRANTS AND THE TRANSFORMATION OF THE U.S. SOUTH is a newly-published collection of essays edited by Mary E. Odem and Elaine Lacy that offers a measured perspective on the larger topic of Latino immigrants in the South. Contributors draw on social science and historical approaches to show the wide array of changes the South has undergone as the Latino population has more than doubled over the past decade. Southern food, religion, race relations, schools, and work places are all dramatically different than they were twenty years ago.

"Odem and Lacy effectively take the pulse of one of the nation's most significant--and unplanned--social experiments: the Latino invasion of Old South states, 1986-2006," comments historian Leon Fink. "Nine essays and a splendid introduction capture a unique tapestry of opportunity, fear, aspiration, and resentment."

If you're looking for more information about the rapidly changing South and Latino immigrants, these books may also interest you:

GROUNDED GLOBALISM: HOW THE U.S. SOUTH EMBRACES THE WORLD by James Peacock