Atlanta Magazine names Charles Seabrook's THE WORLD OF THE SALT MARSH as one of the Top 10 Books of 2012! "In a mesmerizing blend of reporting and memoir, longtime environmental journalist Seabrook captures the poetry and the science behind the marshes that he has loved since his childhood on Johns Island, South Carolina."

A review of THE DELUXE JIM CROW appears in the new Bulletin of the History of Medicine. "Drawing on meticulous, comprehensive research in published sources, archival materials, and oral interviews, [Karen Kruse] Thomas looks at the debates over and implementation of state and federal health programs in the South. . . . The result is a book that illuminates the key influence of region and race on health politices in the first half of the twentieth century."

The Glorified Love Letters blog reviews Marcia Aldrich's COMPANION TO AN UNTOLD STORY. "Not every writer would be able to pull off a book like this, and I don't know how much attention Aldrich has received for her effort — apart from winning the AWP Award for Creative Nonfiction — but I suspect that it isn't what it deserves."

According to the Cemetery Club, ATLANTA'S OAKLAND CEMETERY "is not only an absolutely beautiful book, it's full of information about Oakland as well as helpful cemetery information in general. Chock full of gorgeous full-color photography, this books takes you into this historic cemetery even if you are reading it hundreds of miles away from this impressive cemetery. . . . This is an A+ book on an A+ cemetery."


Derek Askey: Why do people need love stories? Will we always? How were you able to bring a fresh approach to them?

E. J. Levy: Our earliest recorded stories are arguably love stories (if you think of Gilgamesh, for instance, or Penelope awaiting Odysseus). Perhaps that's because love is convenient shorthand for desire, and we need desire to have drama. . . . I hope the collection helps readers re-connect with themselves and one another in a distracted age. 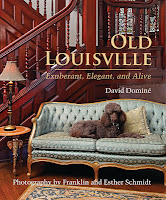 According to CNN Travel, Lonely Planet has named Louisville, KY as one of the top 10 U.S. travel destinations for 2013. "Louisville, Kentucky, was named the top U.S. destination for 2013, following travel publisher Lonely Planet's discussions among its group of U.S. editors and authors. While they tend to debate entries into each year's Top 10 list, everyone agreed on Louisville, said Reid." Before you go visit, you might consider picking up a copy of OLD LOUISVILLE. The book takes readers on an intimate tour of one of the largest and most significant historic preservation districts in America. OLD LOUISVILLE will be available in April. Go here to see an interview with the author and photographers on WHAS 11.

Chapter 16 reviews Benjamin Houston's THE NASHVILLE WAY in the recent Nashville Scene. "THE NASHVILLE WAY is a book that should be read by everyone interested in Nashville's history, particularly by those who lack such an interest but presume to chart our future."

The Washington Post interviews Mark Auslander, author of THE ACCIDENTAL SLAVEOWNER, about his research regarding the construction of the Smithsonian Castle. According to Auslander, the "iconic red sandstone used to build the Smithsonian Castle, one of Washington’s most recognizable buildings, was quarried by slaves, including some who were once most likely owned by Martha Washington."
Posted by UGA Press at 12/13/2012 01:59:00 PM