The Stuffed Scholar's Travelogue: Day One

For the next few days, travel along with Pat Allen as he attends the Southern Foodways Alliance Symposium this weekend. 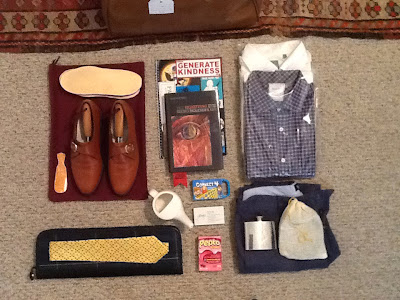 As the Press's acquiring editor for the Southern Foodways Alliance Studies in Culture, People, and Place series, the biennial Cornbread Nation series, and our food and regional interest books in general, I'm excited to attend the SFA symposium at the University of Mississippi for the first time. The annual symposium, now in its sixteenth year, is legendary both for the breadth of its scholarship and the length of after-hours groaning boards. In a series of blog posts over the weekend--a miniseries I'm calling, for my own amusement, The Stuffed Scholar’s Travelogue--I'll be documenting this first-timer's adventure through one of the liveliest academic meetings in the game.

Day One is a half-day of travel from Athens to Oxford, and I'm packing for the trip. A bit antsy about what the weekend holds in store, I asked friends and colleagues who've attended before about what I should expect. A curious number of sports metaphors were given, the most succinct of which was that the weekend will be "a marathon, not a sprint."