Events (and Beer) to Commemorate the Charleston Earthquake 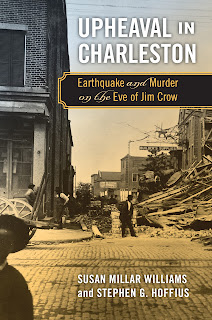 On August 31, 1886, an earthquake devastated the city of Charleston and sent shocks up and down the east coast.

The authors of the recent release UPHEAVAL IN CHARLESTON, which describes both the quake itself and the political and social upheaval aftewards (including a sensational murder trial), will be taking part in several events to mark the 125th anniversary of the earthquake next week.

After the original quake, a company called Palmetto Brewery produced an Earthquake Beer for a celebration to mark the end of the earthquake damage. For the upcoming anniversary, the current Palmetto Brewery will release Aftershock beer, which will feature a historic photo from UPHEAVAL IN CHARLESTON on the label. Charleston's Sugar Bakeshop also plans to feature an earthquake cupcake.

On Sunday, August 28, from 2-5 pm, the Preservation Society of Charleston is hosting an anniversary event with authors Steve Hoffius and Susan Williams at the historic Wentworth Mansion at 149 Wentworth Street in Charleston. Tickets, available online, include food, drink, and a tour of the mansion; proceeds benefit the Seven to Save preservation campaign. The mansion, built as the private home of businessman Francis Silas Rodgers, was under construction at the time of the quake.

In a second event that is free and open to the public (but will not, alas, include Aftershock beer), the authors will speak at the College of Charleston's Addlestone Library, Room 227, on Wednesday, August 31 at 6 pm. The talk is sponsored by the Program in the Carolina Lowcountry and the Atlantic World. Addlestone Library will have an online exhibit and window display featuring information about the quake.

On Saturday, September 3 at 7 pm, the earthquake will be the theme of the Charleston RiverDogs vs. Asheville Tourists game at Joseph P. Riley, Jr. ballpark at 360 Fishburne St. in Charleston. Earthquake beer will be available and the authors will be on hand for a signing. Facts about the quake will be announced every half inning.