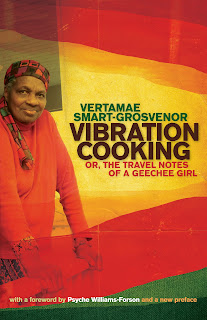 On Tuesday, August 23rd, Restaurant Eugene will welcome Vertamae Smart-Grosvenor to be the next featured author in the Eugene Author Dinner series. Her book, VIBRATION COOKING, OR, THE TRAVEL NOTES OF A GEECHEE GIRL, will be the featured book, and as usual, Restaurant Eugene’s celebrated chef, Linton Hopkins, will prepare a meal inspired by the author’s work.

Vibration Cooking is an autobiographical cookbook, telling Smart-Grosvenor’s story from her childhood in the South Carolina lowcountry, to her travels around Paris and Italy, and her experience in the Black Arts Movement of New York City. Her experiences provide a background for the book’s narrative and inform the “recipes” featured within. Ms. Grosvenor calls herself a “poet, culinary anthropologist and writer,” but she is certainly much more than that.

In addition to Vibration Cooking, which was first published in 1970 and is just re-issued by UGA Press, she has written essays, poems and articles for magazines and newspapers such as The New York Times, The Washington Post, Redbook and Ebony. She is a regular contributor to National Public Radio’s Cultural Desk, and hosted the award-winning documentary series Horizons. She was a member of the Sun Ra Solar-Myth Arkestra and composed an opera entitled “N’Yam.” She was also in the film version of Beloved.

In Vibration Cooking, Smart-Grosvenor makes a case for the importance of Geechee (or gullah) cooking, and its marriage of African influences and what we now think of as traditional Southern food. She was one of the first writers to proclaim the cultural importance of Gullah food. Smart-Grosvenor’s book also emphasizes spontaneity while cooking, using the word “vibration” to refer to cooking by feelings rather than precise measurements, and simply using the ingredients on hand rather than following an exact recipe. During the meal, Smart-Grosvenor will read from and discuss her book. This dinner will surely delight librophiles, gastronomes and farm to table foodies alike.

Festivities begin at 6:30 with a reception and book signing. A four course dinner with pairings will be seated at 7pm. Cost is $105 per person; reservations are required. A complimentary copy of Vibration Cooking will be given to each guest. Smart-Grosvenor will also be available for a signing afterward.