According to the Washington Post, President Barack Obama has selected Myrlie Evers-Williams to deliver the invocation at his public inauguration on January 21. President Obama picked Evers-Williams because her career “reflect[s] the ideals that the Vice President and I continue to pursue for all Americans - justice, equality and opportunity.” Evers-Williams is the widow of civil rights leader Medgar Evers.

On June 12, 1963, Evers was assassinated in the driveway of his Mississippi home by white supremacist Byron De La Beckwith. The first NAACP field secretary for Mississippi, Evers's death was the first assassination of a high-ranking public figure in the civil rights movement. This year marks the 50th anniversary of Medgar Evers's death, and, in honor of Evers, the UGA Press will be releasing two new books on Evers.

The first is REMEMBERING MEDGAR EVERS by Minrose Gwin. The book has a February pub date. In REMEMBERING MEDGAR EVERS, Gwin compiles together an impressive collection of fiction, poetry, memoir, drama, and songs that emerged in response to Evers's life and death. Gwin examines local news accounts about Evers, 1960s gospel and protest music as well as contemporary hip-hop, the haunting poems of Frank X Walker, and contemporary fiction such as The Help and Gwin’s own novel, The Queen of Palmyra. In this study, Evers springs to life as a leader of “plural singularity,” who modeled for southern African Americans a new form of cultural identity that both drew from the past and broke from it.

When speaking of REMEMBERING MEDGAR EVERS, Myrlie Evers-Williams said, "This is a book that should be widely read, shared with others, and placed in a spot of honor in every library. It tells important and all-too-often forgotten stories of the times with clarity and passion. It is a treasure." 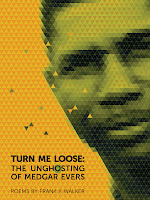 In May, the press will release a new collection of poetry by Frank X Walker that speaks out on the life and loss of Medgar Evers. The poems in TURN ME LOOSE unleash the strong emotions both before and after the moment of assassination and take on the voices of Evers's widow, Myrlie; his brother, Charles; his assassin, Byron De La Beckwith; and each of De La Beckwith's two wives. Except for the book's title, "Turn me loose," which were his final words, Evers remains in this collection silent.

One-Third of 190 Grams of Lead (from TURN ME LOOSE)

Both of them were history, even before one
pulled the trigger, before I rocketed through
the smoking barrel hidden in the honeysuckle
before I tore through a man's back, shattered

his family, a window, and tore through an inner wall
before I bounced off a refrigerator and a coffeepot
before I landed at my destined point in history
— next to a watermelon. What was cruel was the irony

not the melon, not the man falling in slow motion,
but the man squinting through the cross hairs
reducing the justice system to a small circle, praying
that he not miss, then sending me to deliver a message