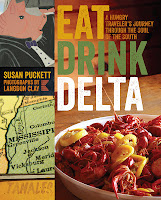 Country Living features EAT DRINK DELTA in its February issue, while the Milwaukee Journal Sentinel recommends it as one of ten new must-have cookbooks. Susan Puckett tackles the Mississippi Delta "with research and respect," and EAT DRINK DELTA "reads like a travel guide with recipes." (New Orleans Times-Picayune)

In an interview with Saporta Report, Susan Puckett answers questions about the Delta and her experiences there. When asked what Atlantans should learn from the Delta, she replies:

Independent neighborhood restaurants are an endangered species, and they need your support. They are often the glue that holds a community together, especially in the Delta.  For the outsider, they can provide a window into a culture we do not understand, to have a better understanding of their own. They also help us keep our stories alive.

The Rewilding Institute highlights the new book, LIFE ON THE BRINK, in a recent blog post on its site.

The Journal of Southern History describes J. Brooks Flippen's JIMMY CARTER, THE POLITICS OF FAMILY, AND THE RISE OF THE RELIGIOUS RIGHT as "a significant contribution to the history of religious politics, American conservatism, the 1970s, and the Carter administration."

Social History of Medicine claims that DELUXE JIM CROW "will likely become the definitive survey of the state of health care in the South in the New Deal and World War Two era for a long time to come."

The Midwest Book Review compliments AN EMPIRE OF SMALL PLACES for its "blend of  geography, history, and social observation" which "makes for a fine survey examining Britain’s colonial empire in North America and its economic and political ties with various Indian nations."