Today's post is by guest blogger, Erin Kirk New. New is art director and designer at the University of Georgia Press.


Over the last year, we have featured work by local artists in our office lobby, which is located on the third floor of the University of Georgia's Main Library. We began with artist Philip Juras, who loaned three of his landscape paintings to the press. The paintings, Connelly Creek, Little Tennessee River Valley, and Fork Mountain Trail, were exhibited through last June. We followed that with three paintings by Vivian Liddell: Quatresteps, Earthly Delights, and Feather Baby. Those paintings have just come down, and we are pleased to announce a new exhibit. 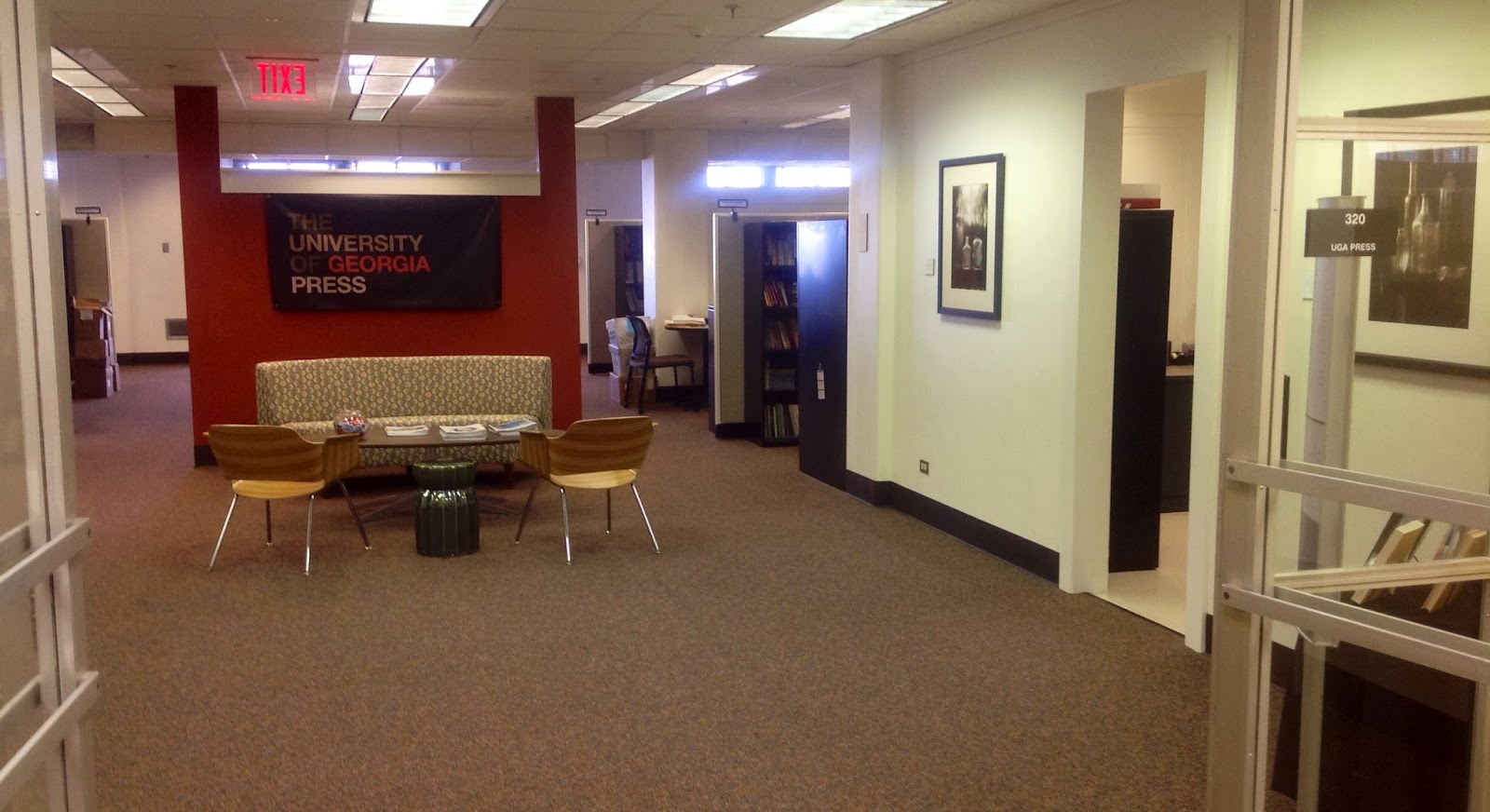 Through June 2014, we will have on display three photographs by Mary Ruth Moore, senior lecturer at the UGA Lamar Dodd School of Art. The photographs were taken using the 1900 studio camera restored by Dr. Robert Nix.


When I was a student in the Lamar Dodd School of Art, I had the great pleasure of taking a photography class in which students built two pinhole cameras, used an antique studio camera, and worked with 35mm film. I felt such a sense of accomplishment in building functioning cameras out of balsa wood and chipboard. Mary Ruth Moore and Dr. Nix encouraged students to have the patience to wait for long exposures that revealed soft and mysterious images. The reward was worth the wait!


The studio camera is 8x10 inch format, vintage 1900. The negative is single-weight, low contrast paper that Kodak no longer makes. The exposures are quite long, from ten minutes to several hours, because the photographic paper responds to light very slowly. The old lens, paper negative, and long exposure, contribute toward a distinct character in the final print: a delicate grain and luminosity.

Photographers spend a lot of time waiting. We wait for the light. We wait out the exposure. We wait for the image to "come up" in the developer. Waiting is important. It may be when we do our most creative thinking.


Mary Ruth Moore has taught photography in the Lamar Dodd School of Art since 1975. She discovered photography by building a pinhole camera in the 1970s in Dr. Nix's beginning photography class. Her recent work concerns a found box converted into a pinhole camera. Before her return to the pinhole her obsession was aged bottles, which were photographed with a 1900 vintage large-format view camera using paper negatives in daylight. Other cameras have included a Nikon FM, outfited with a pinhole as well as a lens, black/white and color film.


Moore's work has been featured on the covers of several UGA Press books, including THE RIDDLE SONG AND OTHER REMEMBERINGS by Rebecca MClanahan, AND VENUS IS BLUE by Mary Hood, and CROSSING WILDCAT RIDGE by Phillip Lee Williams. Her photograph "The Ride" was acquired in 2013 by the Georgia Museum of Art.
Posted by UGA Press at 2/06/2014 09:00:00 AM